From Associated Press and eurweb.com news reports, and The Mississippi Link Newswire

George Zimmerman’s wife is divorcing him.

She is also asking in divorce papers that he pay for a permanent life insurance policy with her named as the beneficiary.

Shellie Zimmerman asked in the petition released Friday that a judge order George Zimmerman to pay the premiums on the policy.

She also is seeking an equal distribution of their checking accounts, trusts, partnerships and any unknown assets.

She asked that a judge prevent him from selling off any property.

The petition says the couple separated a month after Zimmerman was acquitted in July of any crime for fatally shooting 17-year-old Trayvon Martin.

George Zimmerman’s wife says she doesn’t know the man she’s been married to for almost seven years and doesn’t think she “ever really knew him at all.”

In an exclusive interview with ABC News shortly after her attorney filed for divorce from Zimmerman, Shellie Zimmerman said she is left with a shattered life.

“I stood by my husband through everything and I kind of feel like he left me with a bunch of broken glass that I’m supposed to now assemble and make a life…It’s just heartbreaking,” she said.

Shellie Zimmerman, 26, stood by her husband throughout the ordeal that began on Feb. 26, 2012 when her husband shot and killed the unarmed teenager and came to an end when a Florida jury acquitted him of murder in July.

But less than two months later, she filed for divorce.

“I have a selfish husband. And I think George is all about George,” she said.

She claims that at times he was verbally abusive and hurt her “emotionally, but never physical.”

“I think I’m realizing that I have been married to a person for almost seven years, and I don’t think that I ever really knew him at all,” Shellie Zimmerman said.

Shellie Zimmerman said her husband is not only driving too fast, referencing the two incidents in which her husband has been pulled over for speeding recently, but also living too fast since his acquittal.

She says he spent maybe three or four nights at their home with her before she moved out in mid-August. She says she believes the not guilty verdict has left her husband feeling “invincible” and since then has been “making some reckless decisions.”

She is asking for “equitable distribution” of their assets including anything her husband might gain from a defamation suit he has filed against NBC as well as equal share of their debts. She is also seeking sole custody of their two dogs. According to the financial disclosure form, she said she is unemployed and listed her monthly expenses as $755. Since they separated George Zimmerman has given her $4,300 for living expenses and the source of funds appears to be his legal defense fund.

Last week Shellie Zimmerman pled guilty to perjury for lying about the couples’ finances when the judge was initially setting bail for her husband. After a judge handed her 100 hours of community service and a year’s probation, Zimmerman told ABC News last week that she did not know if she would stay married.

Now, she says she is making the decision to cut ties in an effort to leave the drama that has taken over her life since that fateful night in February 2012 behind. 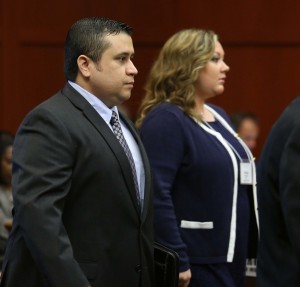 “She was scared,” her attorney, Kelly Sims, said after Wednesday’s hearing. “Her husband was locked up. She didn’t know what was going on. So, she stood by her man, like Tammy Wynette says.”

Asked if she and George Zimmerman are still together, Shellie Zimmerman said, “I’m not going to answer that.”

She added that she “wants to have children and stay married.”

“With George?” the interviewer asked.

“That’s something I’m going to have to think about,” Shellie Zimmerman replied.

In the interview, she also revealed that she wasn’t at their home the night of the teen’s controversial shooting because she’d had a fight with her husband.

“I was staying at my father’s house,” she said. “We had gotten into an argument the night before and I left.”

Shellie Zimmerman says that while she believes her husband’s version of the events leading to the shooting, “I can’t tell you how many nights I’ve gone or laid awake at night just thinking that I wish to God the circumstances had been different.”

She says the couple lived in hiding while awaiting his trial.

“We have pretty much lived like gypsies for the past year and a half. We’ve lived in a 20-foot trailer in the woods, scared every night that someone would go and find us and that it would be horrific,” she said.

Shellie Zimmerman admitted she did not tell the truth during the bail hearing.

“I can rationalize a lot of reasons for why I was misleading, but the truth is that I knew I was lying,” she said.

She said she plans to do her community service with a Christian ministry.

“I’ve made mistakes and I want to own them right now,” Shellie Zimmerman said.

She also told ABC she is deeply sorry for the Martin family’s loss. “I can’t even begin to understand the grief a parent experiences when they lose a child,” she said.

According to WFTV.com, Florida medical examiner Shiping Bao claims that Florida state prosecutors were biased against Trayvon Martin and purposely threw the case. He is suing the state for $100 million.

Bao’s allegations come swiftly on the heels of him being fired from his position as associate medical examiner, a position earning him $176,000 per year… […]

How Mississippi and Emmett Till shaped the March on Washington

August 28, 2013 Monica Land News, Statewide News, Top Stories Comments Off on How Mississippi and Emmett Till shaped the March on Washington

As many across the nation remain in shock and disbelief at the recent verdict in the death of 17-year-old Trayvon Martin, his case has become hauntingly reminiscent of another black teenager gunned down nearly 60 years ago, where his accusers also went forth free.

The murder of Emmett Till is just as relevant today as it was in 1955 when his death not only sparked an avalanche of public outrage and fear across the south. But it also gave courage and determination to the weary and downtrodden – now wiling to die for equal rights. […]

(CNN) – Florida neighborhood watch volunteer George Zimmerman was charged with second-degree murder in the death of unarmed 17-year-old Trayvon Martin, a special prosecutor announced Wednesday. Zimmerman, 28, who had been in hiding, turned himself […]