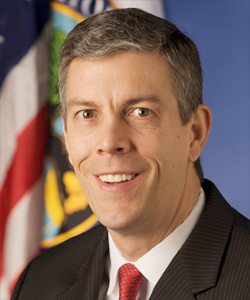 WASHINGTON (AP) — A later start to the school day could help teenagers get the most from their classroom time and local districts should consider delaying the first bell, Education Secretary Arne Duncan said Wednesday.

School districts would still be free to set their own start times, Duncan insisted in a broadcast interview, but he pointed to research that backs up his comments that rested students are ready students. Duncan said he would not be telling local school leaders when their first bells should ring and said it was up to local leaders to make the decisions on their own.

“There’s lots of research and common sense that lots of teens struggle to get up … to get on the bus,” said Duncan, the former chief of Chicago Public Schools.

Buses are a driving factor in when schools start their days, as are after-school jobs for teenagers, extracurricular activities and interscholastic sports. The challenge of transporting students to these activities — as well as classes — often is cited as a reason high school days begin at dawn and end mid-afternoon.

“So often, we design school systems that work for adults and not for kids,” Duncan said.

He has been tracking sleeping patterns of 250 children as well as their IQ tests, performance on standardized tests, their grades and behavior. His findings suggest sleep is just as important to student achievement as diet and exercise.

“All the data that we’ve seen on sleep shows that children, especially teenagers, are sleeping less,” he said. “If you don’t sleep well, you don’t think very well.”

Part of the lack of sleep is biological as teenagers go through puberty, he said. But afterschool programs such as sports or clubs, as well as increased pressure for students to perform well academically, keep them up later than is prudent. Add in caffeine, non-step social interactions through text messages and Facebook and sometimes less-than-ideal home environments, and students have steep challenges.

For students from less affluent families, the effects can be compounded, Buckhalt found.

That doesn’t mean schools are rushing to delay the first period for high school students.

“If any issue cries for local decision making, this is one,” said Patte Barth, director for the Center for Public Education at the National School Boards Association.

The professional organization has not taken a position on the ideal time to start schools, but Barth said Duncan is correct. “Teenagers are much more alert later in the day rather than earlier,” she said.

In schools where the day starts later, there have been immediate gains, she said.

“Some districts have made these adjustments to the school day and they have found among their teenagers that attendance is better, kids aren’t falling asleep,” she said.

But it comes at a cost for other students, both in terms of dollars and opportunities because schools are operating with limited resources.

“If you’re starting the high school kids later, you’re starting elementary kids earlier. No one wants those kids out on the streets when it’s dark,” she said. “If they’re contemplating this switch, they need to look at the costs.”

Kidd ruled Monday that the district is owed a formal hearing before the state can depose the current superintendent and school board.

The state has said it used another section of state law and no formal hearing was required before the governor declared a state of emergency. Gov. Phil Bryant declared an emergency in Leflore County Sept. 17, the same day Kidd first stepped in… […]

CLEVELAND – (AP) A Cleveland School District has a deadline of May 15 to show a federal judge how it will desegregate two schools. The Bolivar Commercial reports that the order from U.S. District Judge […]

A good education ‘by any means necessary

July 30, 2015 Online Editor Education, Opinion Comments Off on A good education ‘by any means necessary

By Kevin Chavous  Executive Counsel American Federation for Children At age 6, Mical spent the majority of his first school year kicked out of class for behavioral issues, including angry and violent outbursts. His Great aunt […]