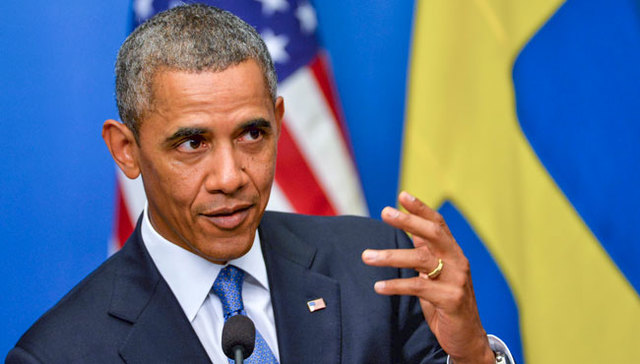 WASHINGTON (AP) — In an impassioned appeal for support both at home and abroad, President Barack Obama said Wednesday the credibility of the international community and Congress is on the line in the debate over how to respond to the alleged use of chemical weapons in Syria. As Obama made his case overseas, legislators on Capitol Hill debated whether a proposed resolution authorizing military force would shift the momentum after more than two years of Syrian civil war.

The Senate Foreign Relations Committee delayed a public meeting and huddled in private for more than three hours after Sen. John McCain, an outspoken advocate of intervention, said he did not support the latest version of the Senate resolution to authorize force. The Arizona Republican said he wants more than cruise missile strikes and other limited action, seeking a stronger response aimed at “reversing the momentum on the battlefield” and hastening the departure of Syrian President Bashar Assad.

On the other side of the debate, Sen. Jim Inhofe, R-Okla., said he was not persuaded to support military action, saying the military has been “decimated” by budget cuts and “we’re just not in a position to take on any major confrontation.”

Sen. Rand Paul, R-Ky., said U.S. involvement could well “make the tragedy worse” in Syria, but he predicted that advocates of military intervention would win in the Senate.

“The only chance of stopping what I consider to be bad policy would be in the House,” he said.

“That wasn’t something I just kind of made up,” he said. “I didn’t pluck it out of thin air. There’s a reason for it.”

Obama said that if the world fails to act, it will send a message that despots and authoritarian regimes “can continue to act with impunity.”

“The moral thing to do is not to stand by and do nothing,” he declared at a news conference in Stockholm with Swedish Prime Minister Fredrik Reinfeldt.

Asked whether he would take action against Syria if he fails to get approval from Congress, the president said his request to lawmakers was not “an empty exercise.” But he said that as commander in chief, “I always preserve the right and the responsibility to act on behalf of America’s national security.”

With Obama in Europe, the president’s top national security aides briefed legislators in a series of public and private hearings, hoping to advance their case for limited strikes against Assad’s regime in retaliation for what the administration says was a deadly sarin gas attack by his forces outside Damascus last month.

Secretary of State John Kerry said Assad’s use of chemical weapons is “a line that anyone with a conscience should draw.” He said U.S. intelligence can prove Assad has used the weapons at least 11 times, and said North Korea and Iran were watching America closely.

“The world is wondering whether the United States of America is going to consent with silence,” Kerry said.

The Senate Foreign Relations Committee’s public meeting on the resolution was delayed, but Sen. Bob Corker of Tennessee, the panel’s senior Republican, said there was a “reasonable chance” of a consensus developing and senators proceeding to a vote Wednesday. The panel began the day with a resolution that would permit Obama to order a “limited and tailored” military mission against Syria, as long as it doesn’t exceed 90 days and involves no American troops on the ground for combat operations.

The committee’s vote would be the first in a series as the president’s request makes its way through Senate and House committees before coming before the two chambers for a final vote.

Sending a message to Congress from afar, Obama insisted there was far more than his own credibility at stake.

Obama’s comments a little more than a year ago were more specific to actions he would take, not Congress or the international community.

In August 2012, he said at a news conference that “a red line for us is we start seeing a whole bunch of chemical weapons moving around or being utilized.”

It’s unclear what treaty ratified by Congress implies that the United States or any other country must respond with military force to the use of chemical weapons anywhere in the world.

To get a green light from Congress, Obama needs to persuade a Republican-dominated House that has opposed almost the entirety of Obama’s agenda since seizing the majority more than three years ago. Several conservative Republicans and some anti-war Democrats already have come out in opposition to Obama’s plans, even as Republican and Democratic House leaders gave their support to the president Tuesday.

House Foreign Affairs Committee Chairman Ed Royce, R-Cal., said Wednesday that while it would be important to deter the use of chemical weapons by Assad and others, there remained many unanswered questions, including what the U.S. would do if Assad retaliated to an American attack.

The committee’s top Democrat, Rep. Eliot Engel of New York, said he backed Obama’s call for military action against Syria but said it should be limited and not involve U.S. ground troops.

The audience at the House Foreign Affairs Committee hearing included several people wearing signs opposing U.S. action against Syria and who had colored the palms of their hands red.

Kerry, Defense Secretary Chuck Hagel and the chairman of the Joint Chiefs of Staff, Gen. Martin Dempsey, made their arguments in public Wednesday before the House panel. They and other senior administration officials also provided classified briefings to the Senate Foreign Relations and Armed Services committees.

As anti-war demonstrators seated behind him silently raised their red-colored hands, Kerry told the Foreign Affairs committee that the world’s nations were watching Congress.

“They want to know whether or not America is going to rise to this moment,” said Kerry.

Hagel seconded Obama’s warnings about the potential scope of danger from failing to uphold international standards, saying “a refusal to act would undermine the credibility of America’s other security commitments — including the president’s commitment to prevent Iran from acquiring a nuclear weapon.”

Obama, who arrived in Stockholm early Wednesday, was hoping to maintain the momentum toward congressional approval that he has generated since Saturday, when he announced he would ask lawmakers to authorize what until then had appeared to be imminent military action against Syria.

Because public safety is always the FBI’s first priority in any investigation, that location was immediately sealed off and appropriate public health authorities were notified. The FBI is now conducting further forensic examination for the purpose of identifying trace evidence, residues, and signatures of production that could provide evidence to support the investigation.

Ricin is a poison found naturally in castor beans. Ricin poisoning can occur when the substance enters the body through ingestion, inhalation, or injection. To date, the FBI is not aware of any illness as a result of exposure to these letters. […]

Police at the University of Mississippi say they have turned over to the FBI information regarding vandalism apparently aimed at an African-American freshman.

“We are presenting everything we have about this case to them,” University Police Chief Calvin Sellers said in The Oxford Eagle “They will investigate to see if this is a hate crime or civil rights violations.”
[…]