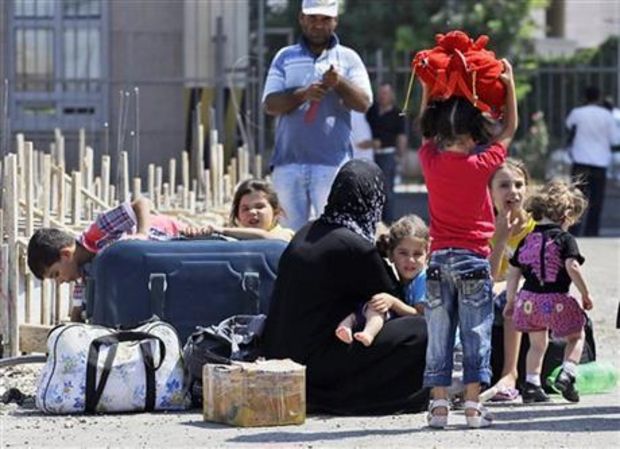 Syrian refugees arrive at the Turkish Cilvegozu gate border, Monday, Sept. 2, 2013. Routine prevailed at a US-Turkish airbase in southern Turkey on Monday, a day after the US alleged that sarin gas was used in an August chemical weapons attack in Syria. (AP Photo/Gregorio Borgia)

BEIRUT (AP) — The number of refugees fleeing Syria’s violence has surpassed the 2 million mark, the U.N. refugee agency said Tuesday, as top U.S. officials prepared to argue before a key Senate committee for a punitive strike against the regime of Syrian President Bashar Assad.

Earlier, the U.S. administration won backing from French intelligence and reportedly also from Germany’s spy agency for its claim that Assad’s forces were responsible for suspected chemical weapons attacks on rebel-held areas near Damascus that are believed to have killed hundreds of Syrian civilians.

A nine-page intelligence synopsis published by the French government Monday concluded that the regime launched the Aug. 21 attacks involving a “massive use of chemical agents” and could carry out similar strikes in the future.

In Germany, the news magazine Der Spiegel reported that the Federal Intelligence Service (BND) also believes Assad’s regime was behind the attacks. On its website, the magazine reported that BND head Gerhard Schindler recently told top government officials in a secret briefing that while the evidence is not absolutely conclusive, an “analysis of plausibility” supports the idea of the Syrian government as the perpetrator.

The Assad regime has denied using chemical weapons, blaming rebels instead. Neither the U.S. nor Syria and its allies have presented conclusive proof in public.

The Obama administration insists it has a strong case against the Assad regime and that chemical weapons use must not go unpunished. Last week, President Barack Obama appeared poised to authorize military strikes, but unexpectedly stepped back to first seek approval from Congress, which returns from summer recess next week.

Since then, the administration has relentlessly lobbied Congress for support in the most important foreign policy vote since the Iraq war a decade ago. Members of Obama’s national security and intelligence teams have been holding classified, closed-door briefings for members of Congress. More sessions were scheduled for Tuesday (today), Thursday and Friday.

Also Today, Secretary of State John Kerry, Defense Secretary Chuck Hagel and Gen. Martin Dempsey, chairman of the Joint Chiefs of Staff, testified publicly before the Senate Foreign Relations Committee. Obama, meanwhile, is to meet with leaders of the House and Senate armed services committees, the foreign relations committees and the intelligence committees.

The Syria conflict erupted in March 2011 with a popular uprising against Assad that quickly escalated into a civil war that has killed more than 100,000 people.

The U.N. refugee agency announced Tuesday that the number of Syrians who have fled the country has surpassed the 2 million mark.

Along with more than four million people displaced inside Syria, this means more than six million Syrians have been uprooted, out of an estimated population of 23 million.

Antonio Guterres, the head of the Office for the U.N. High Commissioner for Refugees, said Syria is hemorrhaging an average of almost 5,000 citizens a day across its borders, many of them with little more than the clothes they are wearing. Nearly 1.8 million refugees have fled in the past 12 months alone, he said.

The agency’s special envoy, Angelina Jolie, said “some neighboring countries could be brought to the point of collapse” if the situation keeps deteriorating at its current pace. Most Syrian refugees have fled to Jordan, Lebanon and Turkey.

Despite the grim toll, Assad has not shown any signs of backing down.

Assad and some in his inner circle are from Syria’s minority Alawites, or followers of an offshoot of Shiite Islam, who believe they would not have a place in Syria if the rebels win. Most of those trying to topple Assad are Sunni Muslims, with Islamic militants, including those linked to the al-Qaida terror network, increasingly dominant among the rebels.

In an interview with the French newspaper Le Figaro on Monday, Assad challenged the West to present proof of his regime’s alleged involvement in the purported chemical weapons attacks.

“If the Americans, the French or the British had a shred of proof, they would have shown it beginning on the first day,” he said, deriding Obama as “weak” and having buckled to U.S. domestic political pressure.

“We believe that a strong man is one who prevents war, not one who inflames it,” Assad said.

However, the German intelligence assessment, as reported by Der Spiegel, said only the Assad regime would have been capable of launching the attacks.

Kerry has said the U.S. has evidence the nerve agent sarin was used in the attacks. Schindler, the German intelligence chief, said in his briefing that only the regime has sarin at its disposal and that only experts of the regime could mix the agents and use them with small rockets, Der Spiegel wrote.

The BND believes the regime has used chemical weapons before, but that a more diluted mix was used in the earlier attacks, the magazine wrote. Schindler raised the possibility that a more toxic mix may have been inadvertently loaded into the shells fired on Aug. 21 on rebel-held areas west and east of Damascus, Der Spiegel reported.

The German spy agency also intercepted a phone call in which a senior official from the Lebanese militia Hezbollah told Iranian diplomats that Assad had miscalculated by ordering the sarin attack, Der Spiegel said. Hezbollah and Iran are Assad allies.

The U.S. claims that at least 1,429 people were killed in the Aug. 21 attacks, including more than 400 children. The Britain-based Syrian Observatory for Human Rights, which collects information from a network of anti-regime activists, says it has so far only been able to confirm 502 dead.