JACKSON – (AP) A Mississippi family is asking a federal appeals court to reinstate their multimillion dollar wrongful death lawsuit against the city of Cleveland and two police officers.

The 5th U.S. Circuit Court of Appeals in New Orleans has scheduled the case for oral arguments on Sept. 4. 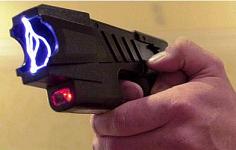 Williams, 30, died July 23, 2010, in a confrontation with two officers responding to a call about loiterers.

Authorities said officers found what they believed to be a bag of cocaine, which Williams allegedly grabbed and ran. Officers used the stun guns to subdue Williams when he became combative.

City officials said experts had trained officers on the use of stun guns.

U.S. District Judge Sharion Aycock in north Mississippi dismissed the lawsuit in 2012, ruling that the officers' conduct did not rise to the level of reckless disregard. She also dismissed the family's product liability claim against the stun gun manufacturer.

The case is among several from Mississippi before the 5th Circuit in its September term.

In a second stun gun case, Dawn Melissa Daigre is appealing the dismissal of her lawsuit against the city of Waveland. The 5th Circuit has set the case for oral arguments on Sept. 4 in El Paso, Texas.

Daigre sued Waveland for damages incurred during her February 2010 arrest.

The city contended that because Daigre pleaded guilty to resisting arrest, she is barred from challenging that ruling in the lawsuit.

The lawsuit argued that Daigre was 16 weeks pregnant when officers broke down her front door, apparently responding to a domestic disturbance call. Daigre said officers shocked her even though she'd told them she was pregnant. She gave birth to a girl five months later.

Daigre's attorney said she pleaded guilty only because she was offered a plea to get out of jail, and that should not have absolved officers from liability.

Guirola said in his ruling that the law was clear.

“Daigre protests in her pleadings that she entered a guilty plea simply so that she would be released from prison,'' Guirola sad. “That may be the case, but under the law, she cannot now seek damages based on an assertion that despite her guilty plea, she did not actually commit any offense.''

A federal judge has dismissed a lawsuit that alleged Waveland police officers used a stun gun on a pregnant woman.

The Sea Coast Echo reports that the lawsuit was dismissed this past week by U.S. District Judge Louis Guirola. […]