Victim was a 14-year-old girl 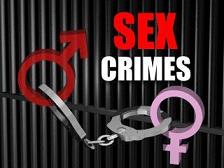 A 63-year-old Columbia man has been booked on charges of inappropriately touching a 14-year-old girl. WDAM reports that Larry James Watts surrendered to police earlier this month.

Police said they received a complaint regarding sexual activity with a 14-year-old girl.

According to investigators, Watts inappropriately touched the girl.

He was booked at the Marion County jail on charges of touching of a child for lustful purposes, a felony.

Two visitors to the coast were arrested on July 29 after Waveland Police said they found them drunk and swimming naked on the beach near Whispering Pines, WDAM reported.

Officers investigating a complaint first found the couple's vehicle parked on the walking path. They then spotted Joseph Woloszynski of New Orleans completely naked; Kelsey Brooks of Cinnaminson, NJ was topless. After approaching the couple, police also discovered they were intoxicated, WDAM reported.

Both Woloszynski and Brooks were arrested and charged with public intoxication and indecent exposure.

They were transported to the Hancock County Jail where their bond was set at $600 each.

Store employees told investigators that two men came to the back door of the store and held the owner at gunpoint.

The suspects stole narcotics and an unknown amount of money, police say.

The store reopened the next day.

Portion of Beach Boulevard shut down

A portion of Beach Boulevard was closed earlier this month to install a new crosswalk.

The Sun Herald reports the road was closed to vehicles between City Park Street and Oliver Street. One-way traffic on both streets was maintained as it is normal.

The work was to take about five days and included cutting out asphalt, pouring concrete, and installing brick pavers. The road was to reopen as soon as the concrete had set enough for vehicles to pass on it.