CHARLOTTE, North Carolina – (AP) Julius LeVonne Chambers, a Charlotte attorney whose practice was in the forefront of the civil rights movement in North Carolina, has died, his law firm said. He was 76.

A statement issued by his law firm, Ferguson Chambers & Sumter, said Chambers died Friday, Aug. 2 after months of declining health. A specific cause of death wasn't given. 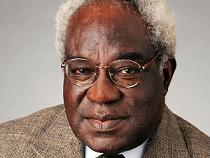 “Mr. Chambers was not the first lawyer of color to try to address the issues of equality,'' firm partner Geraldine Sumter said. “He would tell you he had people like Buddy Malone of Durham that he looked to, the Kennedys out of Winston-Salem. The thing that Mr. Chambers brought to that struggle was a very focused, determined attitude that things were going to change.''

The North Carolina chapter of the NAACP called Chambers “a man of tremendous courage.''

“His home and his car were firebombed on separate occasions in 1965, and his office was burned to the ground in 1971, during the height of some of his most contentious civil rights litigation in North Carolina,'' the NAACP said in a statement.

North Carolina Attorney General Roy Cooper called Chambers “a friend who set a courageous example of doing what is right regardless of the cost.''

In 1964, Chambers opened a law practice that became the state's first integrated law firm. He and his partners won cases that shaped civil rights law, including Swann v. Charlotte-Mecklenburg Board of Education regarding school busing.

The 1971 ruling in the case mandated crosstown busing and highlighted the power of federal courts to intervene when local public school systems hedged en route to full integration. The case came as then-Gov. Bob Scott had just taken office. Although Chambers won the case, Scott had already pledged that he wouldn't allow state money to be spent for busing.

“Chambers probably, being one of those lawyers rooted in the South, was able to see the inequities more clearly because they were so stark here in the late 60s and `70s,'' Sumter said.

The Charlotte Observer reports that Chambers took eight cases before the U.S. Supreme Court and won them all.

Chambers also served as chancellor of his alma mater, North Carolina Central University, from 1993 to 2001.

Funeral services for Chambers were held on Aug. 8 in Charlotte, North Carolina.