First family of Mississippi barbecue coming to ‘The Shed’

OCEAN SPRINGS – When Starkville-native Robbie Montgomery launched her “Welcome to Sweetie Pies” on the Oprah Winfrey Network (OWN), it quickly became one of their most successful shows to date. And now with the Food Network premiering The Shed this Sunday night, television viewers will get another look at how good old-fashioned Mississippi country cooking is done.

Located in Ocean Springs off Highway 57 and Interstate 10, The Shed, is the dreamchild of founders Brad Orrison and his sister, Brooke Lewis.

For the Orrison family, barbecuing isn’t simply a habit; it’s a way of life, the Food Network said in a release. This loveably quirky and offbeat bunch is known for their over-the-top personalities and offers food to match, specializing in finger-lickin’-good ribs and from-scratch barbecue sauce.

Together, Brad and Brooke, and their parents, Daddy-O and Mamma Mia, are shining a light on their barbecue business as well as their day-to-day adventures in their all new series which premieres at 9 pm, and then airing every Monday night at the same time.

After suffering a devastating fire in 2012, the Orrison’s rebuilt with the help of not only the Ocean Springs community but from loyal fans around the world. 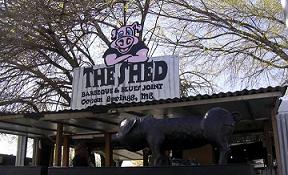 Now with three locations, The Shed has been featured on several television shows including Mississippi Roads; Live! With Regis and Kathie Lee; the Food Network’s Diners, Drive-Ins and Dives and the Travel Channel’s Man vs. Food.

From the muddy swamps and garages to the bull-shaped barbecues at their holiday-lights-clad restaurants, the Orrisons and The Shed prove what makes their brood one-of-a-kind and their award-winning meats worthy of the hype.

VICKSBURG – (AP) The new Miss Mississippi is a woman who plans to be a physician and who graduated from the University of Mississippi with a double major in French and international studies. This […]