JACKSON – Police Chief Lindsey Horton has confirmed the death of a Jackson Police Officer, his first since being named to his new post earlier this month. Horton said 35-year Bruce Jacob was killed Saturday afternoon after being hit by a motorist in the southbound lanes of I-55 and Northside Drive. 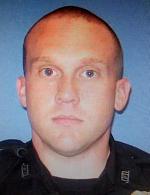 Jacob, a Precinct Four officer, and a five year veteran of the police force, received a call about debris on the roadway of I-55 south about 1:30 p.m. He had reportedly retrieved a barbecue grill that had fallen off a truck and was putting it in the trunk of his cruiser when another vehicle came from behind and hit him.

The driver of the car that struck Jacob was not named, but was said to be receiving medical treatment at UMC. A damaged white Lexus was reportedly at the scene of the accident.

No charges have been filed as of yet.

Jacob is the department’s first death since Detective Eric Smith was gunned down by a murder suspect during an interrogation in April.

“Our police officers put their lives on the line every minute of everyday day,“ he said. “[Today] we suffered another tragic and senseless loss of one of Jackson’s chosen.  I acknowledge and appreciate the commitment and service of Officer Bruce Jacob. May God bless his loving wife and family and may God bless our officers.”

Arrangements for Officer Jacob have not been released.

WLBT reports that the first happened around 12:30 a.m. Saturday. Police said the 38-year-old victim was shot four times in the parking lot of an apartment complex.

Another shooting happened just after 2 a.m. Saturday. A 23-year-old man was gunned down at a Jackson intersection. He was shot five times and was pronounced dead on the scene. No arrests have been reported so far as the investigations continue. […]

WLBT is reporting that authorities are investigating their third homicide in the Capital City this weekend.

The most recent murder occurred Sunday afternoon in west Jackson where a 34-year-old man was shot several times and subsequently died of his injuries. […]

Unlike some communities all over the globe that thirst in vain for Kwanzaa celebrations, in Mississippi it was the city of Port Gibson that stood out as it observed the event with splendid activities.