JACKSON – (AP) Farmers are finally catching up on cotton planting, but experts are worried that the late start could expose the crop to more insects than if wet weather hadn’t delayed planting.

Mississippi farmers had intended to plant corn on many acres in hopes of cashing in on high prices. But winter and spring rains left many fields waterlogged, making it hard for tractors to plant as early as required for corn. 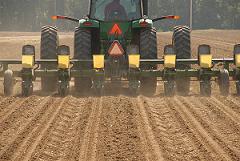 Cotton and soybeans can be planted later, and farmers’ plans for cotton ballooned to 340,000 acres from what had been projected to be a historic low of about 200,000. Mississippi farmers planted 580,000 acres of cotton in 2012.

With some dry weather, cotton planting has sprinted ahead. The U.S. Department of Agriculture, in its June 3 crop report, said 77 percent of cotton had been planted, up from 36 percent the previous week. Much cotton died and had to be replanted, and Mississippi State University experts are warning that insect populations could build because of the late start.

“We have replanted about 40 percent of our cotton,” Stephen Winters of Grenada County told the USDA in its June 3 report. “We should finish up all the cotton planting by the first of the week.”

Angus Catchot, who studies crop pests for the Mississippi State University Extension Service, said pests could be a problem.

“We’ve got a lot of data that suggests that anytime you push the cotton crop late in the Midsouth, it exposes us to bigger populations of insects that have had time to build,” Catchot said. “As the season progresses, these insects are harder to control.”

Heavy rains are still leaving their mark in some places. Water is still standing in the low corners of some Delta fields. And corn is only waist high in a few fields where farmers planted late. Many gave up and sent back their corn seed in favor of cotton or soybeans. Soybean planting, though, was less than three-quarters complete by June 3.

“Soybean planting has been greatly delayed due to the previous wet and cold weather,” Randy Smith, a Covington County farmer, told the USDA. “South Mississippi will be planting soybeans into July due to the adverse weather.”