COLUMBUS – (AP) Columbus Air Force Base officials say construction of a center runway is ahead of its projected late-August completion target. 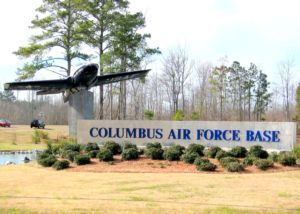 The Commercial Dispatch reports the work began in March and officials say it is about two-third complete.

The $31.29-million project is the most extensive overhaul to the two-mile runway since it was built in 1959.

Pheba-based Babcock Construction was awarded the contract in 2012 as the project’s general contractor.

“One of the challenges with the project (is) obviously the wet spring that we’ve had. There’s been a lot of rain,” said project manager John Trumm.

Lt. Col. David Meissen said the base’s other two runways as well as runways at Golden Triangle Regional Airport are being used for pilot training missions while the work is going on.

Meissen said the base flies nearly 270 sorties each day, so completion of the center runway will be welcome and used to more evenly distribute those deployments.

The National Weather Service (NWS) and the National Oceanic and Atmospheric Administration (NOAA) have issued winter weather alerts for numerous counties across the state.

An ice storm warning is in effect for the upper Delta until 6 p.m. Monday, Jan. 14.

A freezing rain advisory has been issued for Elliot, Gore Springs, Grenada and Holcomb until 6 p.m., Jan. 14.

A winter weather advisory has been issued for Abbeville and Algoma until 12 p.m., Tuesday, Jan. 15. […]

The new facility, which will allow the company to increase its commercial composites manufacturing operations, represents a corporate investment of $17 million and is creating 250 new jobs. […]

Woman gets 5 years in prison for sex with 2 teens

A Lowndes woman has been sentenced to five years in prison for having sex with two teenagers.

She also will be on post-release supervision for five years. […]