“More than 21.3 million annual visitors to the state can attest to the artistic spirit, rich history and cultural uniqueness of small towns like Cleveland,” said Malcolm White, director of the Mississippi Development Authority’s Tourism Division. “What an honor for Cleveland to be recognized at the national level. From blues to fine arts, Cleveland showcases some of the best of our state’s heritage and talent.”

“We are very excited about this designation and appreciate the attention it is bringing to Cleveland and the surrounding area,” said Cheryl Line, Cleveland-Bolivar County Tourism Director. “We hope this recognition will bring more visitors to learn about the mystique of the Mississippi Delta.”

To compile the “best of” list, the magazine worked with the geographic information company Esri to search for small towns and cities with populations of less than 15,000 that had exceptional concentrations of museums, art galleries, orchestras, theaters, historic sites and other cultural assets.

According to Smithsonian, “…the top towns also boast heartwarming settings where the air is a little fresher, the grass greener, the pace gentler than in metropolitan America. Generally, they’re devoted to preserving their historic centers, encouraging talent and supporting careful economic growth. There’s usually an institution of higher learning, too.”

The magazine also cited the people as another determining factor for each town on the Top 20 list. Unpretentious, small-town values and high cultural expectations were noted as key characteristics of the people in each of the selected communities.

White added, “As we prepare for the opening of the Grammy Museum in 2015, this is an excellent reminder of why Cleveland was the ideal location for such a monumental project.”

An excerpt from the article outlines some of Cleveland’s many charms:

American music would not be what it is today without the blues. It welled up in the Delta—arguably at Dockery Farms plantation, five miles east of Cleveland—for myriad reasons. But ultimately, said Tricia Walker, director of the Delta Music Institute at Cleveland’s Delta State University, “There was nothing to do at the end of the day but sit on the porch and play.” 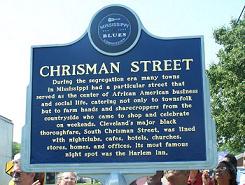 There’s more to do now in Cleveland. New blood has washed through town, restoring the Historic Crosstie business district with its beguiling Railroad Heritage Museum, bringing an arts alliance to a vintage movie theater, filling rehabbed warehouses with galleries and restaurants. Creative young locals surprise even themselves by coming home to stay after college, though their art group’s wry motto—“Keep Cleveland Boring”—confounds elders. And here’s something for the front page: In early 2015 a $12 million Grammy Museum will open on the DSU campus.

The university, which opened in 1925 as a teacher’s college, kept Cleveland alive and draws audiences for concerts, dance, theater and film to its stylish Bologna Performing Arts Center. The Delta Center for Culture and Learning offers tours, lectures and workshops. The university’s Dave “Boo” Ferriss Museum celebrates a Delta-born Boston Red Sox pitcher and longtime DSU coach. The Delta Music Institute prepares students for careers in the industry and sends new talent to local clubs like Hey Joe’s, On the Rocks and the Pickled Okra.

Cleveland also boasts five markers on the Mississippi Blues Trail and the Great River Road State Park. The Crosstie Arts and Jazz Festival is held in April and nearby Rosedale offers the Crossroads Blues and Heritage Festival in May.

Investigation continues in case of woman run over by boyfriend's truck

Authorities said a Bolivar County woman was killed after she was hit by her boyfriend’s truck then run over by oncoming traffic.

Reportedly, on that early Saturday morning, Harmon – a Cleveland resident – was walking on the side of Highway 61 about 4.5 miles south of Shaw when she was hit. Marks on the highway show where Harmon was struck and killed. […]

– A groundbreaking ceremony for the new Grammy Museum was held at Delta State’s Derrall Foreman Golf Course near Highway 8 in Cleveland on Tuesday, June 11.

The event was organized by Cleveland Music Foundation.

Gov. Phil Bryant presented a check for $2 million to the project. Lt. Gov. Tate Reeves and Sen. Willie Simmons were scheduled to speak. Deputy Director of Grammy Museum at L.A. Live in Los Angeles Rita George was also scheduled to address the crowd. […]

Gov. Phil Bryant has blocked lawmakers’ attempt to send $3 million from the Mississippi Development Authority budget to the proposed Grammy museum in Cleveland.

House and Senate Appropriations Committee chairmen sent a May 25 letter to the authority saying legislators intended for MDA to give $3 million to the museum. […]