RIDGELAND – (AP) BancorpSouth is setting aside a $500 million loan fund aimed at Mississippi businesses, saying it will work with state officials to find qualified borrowers. 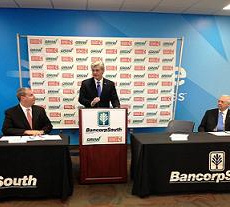 on March 28. The officials spoke at the headquarters of C Spire Wireless, citing the eight-story office building as an example of a project made possible by cooperation between BancorpSouth and a state program.

“Ensuring that businesses have access to capital is a critical element in positioning Mississippi as the top spot for economic development,” Bryant said. “I applaud BancorpSouth for taking a leadership role in this new effort.”

The fund underscores bank efforts to step up lending as coffers swell with deposits. Because the main profit engine of banks is lending out money at interest, the low level of loans compared to deposits is keeping bank profitability from a full return to pre-recession levels.

“There’s been some perception on a national basis about banks not making loans,” Tommy Darnell, BancorpSouth’s executive vice president of corporate banking, said Wednesday in a telephone interview. “I can’t think of any time in my career where we have been more eager in making loans.”

The move echoes a $1 billion pool Regions Financial Corp. announced for Alabama businesses in February. Like BancorpSouth in Mississippi, Regions pledged to work with state officials to find projects that needed loans.

Banks clamped down on lending during the recession, especially for real estate development, as the institutions lost billions on bad loans. Surveys showed that it got substantially harder to get a loan in 2008 and 2009. But since then, terms have gotten easier. For example, a monthly National Federation of Independent Businesses survey reports a steady improvement in loan availability since bottoming out in early 2009.

The share of businesses that said they can’t borrow all they want has fallen, but respondents say credit still remains tight compared to most of the past 20 years.

Many businesses, scared of running up debt as sales fell, stopped borrowing during the economic downturn. The same NFIB survey suggests that loan demand hasn’t rebounded, even as short-term interest rates have fallen. About 30 percent of survey respondents are borrowing regularly, down from about 35 percent at the beginning of the recession.

Cash has flooded into banks even as the amount of money on loan has fallen. Among Mississippi commercial banks, the ratio of loans to deposits fell to 75.5 percent at Dec. 31, the lowest level in more than a decade, according to FDIC figures. The ratio of loans to deposits is even lower at BancorpSouth, with its $8.5 billion in loans equal to only 63 percent of deposits. At the end of 2007, as the real estate boom imploded, BancorpSouth had $9 billion in loans outstanding, equal to 90 percent of deposits.

BancorpSouth says it will work with the Mississippi Development Authority and the Mississippi Business Finance Corp., as well as with the U.S. Small Business Administration. The SBA ranked Regions as No. 10 and BancorpSouth as No. 11 among large banks nationwide making small business loans under $1 million in 2010-2011, the most recent reported year. BancorpSouth’s small lending was heavily concentrated in loans between $100,000 and $1 million.

With bad commercial real-estate loans leaving a sour taste, banks have fought heavily to lend to businesses for other purposes, such as equipment leases.

“I think this is an attempt by BancorpSouth to compete for any good Mississippi loan we can uncover,” Darnell said.