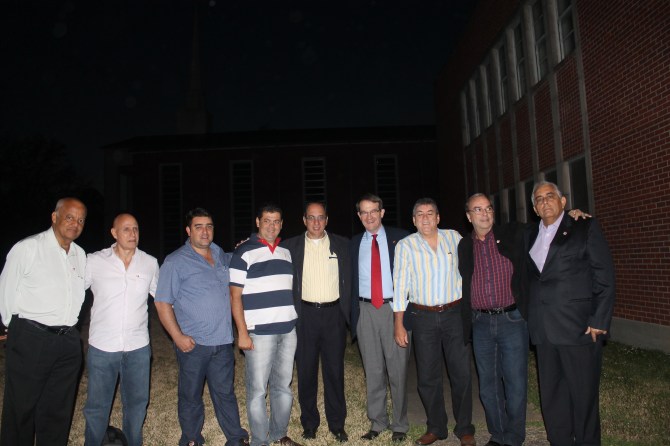 The delegation from Brazil came to Mississippi to support workers at Nissan plant in Canton to gain right to unionize.

MAFFAN members spoke of how Nissan consistently ignores or violates international human rights standards on freedom to organize a union and the freedom of assembly.

According to record, the Brazilian delegation represents an 8 million member union that represents retail workers and employees who work at the Nissan dealerships in Brazil, led by Ricardo Patah, the national president of the UGT (Union of General Workers).

Accompanying Patah were six other members of his union, including Roberto Lucera, who is also a member of the Brazilian Parliament. Two other members of the delegation were from the Metal Workers Union (CNTM/Forca Sindical) representing the workers in the Renault/Nissan factory in Brazil and will represent the Nissan workers at the new Nissan plant near Rio de Janeiro.

According to the delegation, “Brazilian unions are very concerned about corporations that violate international human rights standards anywhere in the world, and that’s why they are so concerned about Nissan’s activities in Mississippi.

“They are especially concerned about Nissan because Brazil is one of the world’s fastest growing auto markets. And Nissan has been the fastest-growing automaker in Brazil for the past three years; it is constructing a new plant in Resende, Rio de Janeiro. Nissan is also a sponsor of the 2014 World Cup and the 2016 Rio de Janeiro Olympics. The global CEO of Nissan, Carlos Ghosn, is Brazilian.”

Mark Haasis shared the history of Brazil’s strong union movement. “Many people have been brought out of poverty in Brazil. We actually have nine colleagues who are union leaders.”

“The U.S. is a country that has taught us very much,” said Patah. “I look back when Chicago faced some challenges in the 19th century. It is also the country that gave us international women’s day because of the struggle of women workers in this country.

“The U.S. is a country that has always inspired us. Thus we are more strengthened and able to make a contribution to help American workers in any way we can – especially Nissan workers in Mississippi, to organize, to be able to win for themselves and get a contract.”

Bob King, president of the UAW, communicated his excitement of the Brazilian’s visit, calling it a unique experience and an historical break-through in America.

“I am inspired by the Brazilians. They have come all the way here to organize, to establish collective bargaining and to support the human rights of these workers. I believe a good employee deserves good wages. There has not been a campaign that I am aware of anywhere in the United States that is led by the workers like the campaign in Canton, Miss.,” said King.

“Just like Congressman Thompson said, there is an orchestration to divide, intimidate, disrespect, berate and scare people. It is outrageous, unjust and all outright blatant lies. It sounds extreme, but it is what these workers have to put up with. They are making so much profit off the backs of workers here in Mississippi. They pay less and discipline harshly and there are no bonuses. It is a plantation mentality.

“This campaign to me is what I believe Mississippi is about and that is the heart of the civil rights movement. Congressman Thompson is a leader in this country. We are going to win this because we are not going the traditional route to over throw Nissan’s abuse of workers here. Derek Johnson, MS-NAACP President has been in this from day one as well and speaks so eloquently about why it is important to have unions in America.”

“Pay the workers what they deserve.” Thompson said, “It is clear that Nissan is about the business of trying to divide the community. The workers must organize themselves. I am here to support the workers, step by step, and it’s not going to be easy.

“A month ago, Nissan came by my office in Washington for the first time in 10 years and they brought black people with them. They were bringing people there to tell me how good Nissan has been to them – just like on the plantation. They are trying to counter everything you are saying by saying, ‘See how good we are! See how good we treat our slaves!’

“All I can say is we have elections going on in May. We need to make sure that the pro-union people get elected. They are going to run some people by you. So don’t be fooled by those running for re-election. Vote in May. Let’s not be fooled. If it walks like a duck and quacks like a duck, then it must be a duck. Continue to organize and don’t let Nissan divide you.”

This delegation follows a visit by two leaders of the largest Brazilian labor federation CUT, who came to Jackson to stand with Nissan workers and MAFFAN in late January of this year, attending a rally held at Tougaloo College with Danny Glover in attendance.