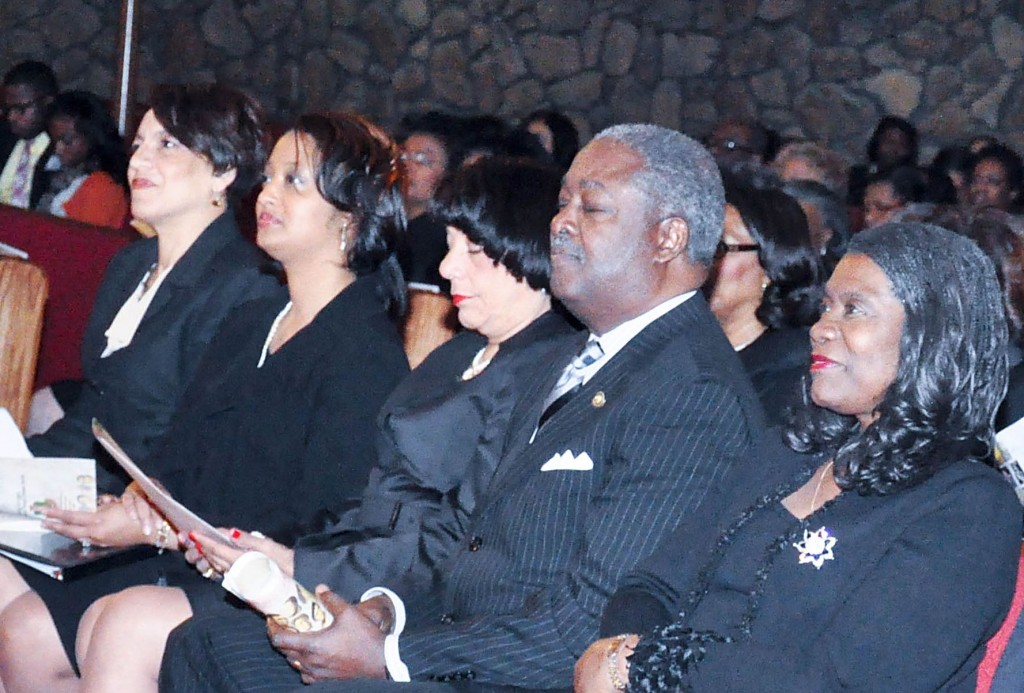 The theme for celebration of the 105th Founders’

Day of the Alpha Kappa Alpha Sorority Incorporated Chapters was “Embracing Our Legacy: Reflections of Sisterhood Through Timeless Service.”

The women who make up the chapters celebrated the rich legacy of Alpha Kappa Alpha and its continued dedication to service in the community, also serving as a reflection of why “Women’s History Month” is observed.

Guest speaker, Dr. Beverly Wade Hogan, president of Tougaloo College and an AKA member, gave an inspiring and challenging address that encouraged those in attendance to “overcome the common stereotypes associated with women and to exude confidence in all actions.”

Alpha Kappa Alpha Sorority, Incorporated was founded Jan. 15, 1908, on the campus of Howard University in Washington, D.C. It is the oldest Greek-lettered organization established by African-American college-educated women and today is international.

It is comprised of over 260,000 members in graduate and undergraduate chapters in the United States, the U. S. Virgin Islands, the Caribbean, Canada, Japan, Germany, Korea, and various African countries.

The Beta Delta Omega Chapter was chartered in 1934, and Gamma Omicron and Gamma Rho chapters were chartered in 1949. All three of these chapters have maintained vital roles in community service in the Jackson and Tougaloo areas.

Maintaining the ideal of serving others, the guests donated canned goods to the pantry at Anderson United Methodist Church, where the celebration was held.

Michelle Guy and Tonya Parker were the Founders’ Day co-chairs. The members of Beta Delta Omega, Gamma Omicron (Tougaloo College), and Gamma Rho (Jackson State University) Chapters of Alpha Kappa Alpha Sorority shared in the celebration, as these institutions also share in the history of the great women who have served and continue to serve within our communities. Among them are:

Honorary member Coretta Scott King: Mrs. King was an American author, activist, and civil rights leader. The widow of Martin Luther King Jr., she helped to lead the African-American Civil Rights Movement in the 1960 and played a vital role in the years after her husband’s 1968 assassination when she took on the leadership of the struggle for racial equality herself and became active in the Women’s Movement.

She took part in the Montgomery Bus Boycott of 1955 and had an active role in advocating for civil rights legislation. Most prominently, she worked hard to pass the Civil Rights Act of 1964.

Mrs. King broadened her focus to include women’s rights, LGBT rights, economic issues and world peace. As early as December 1968, during a Solidarity Day speech, she called for women to “unite and form a solid block of women power to fight the three great evils of racism, poverty and war.”

Mrs. King founded the Martin Luther King Jr. Center for Nonviolent Social Change in Atlanta. The Center is the official memorial dedicated to the advancement of the legacy and ideas of Dr. King. She served as the Center’s president and CEO from its inception until she passed the reins to her son Dexter Scott King. She was also an honorary member of Alpha Kappa Alpha Sorority, Incorporated.

Beverly Wade Hogan: A native Mississippian, Hogan has served as president of Tougaloo College since May 2002. She is the first woman and 13th president to lead the historic institution. She is described as a visionary, an “outside of the box” thinker, disciplined, compassionate, firm, fair, analytical and spiritual leader.

Under her leadership, new degree programs in mass communications, hotel and hospitality management, and religious studies have been added at Tougaloo. A new Honors Program and three centers have been established – the Center for Undergraduate Research, the Center for Continuing Education and Professional Studies, and the Center for Civic Engagement and Social Responsibility, as well as an Office of International Affairs.

The College also has been designated as a Center of Excellence in Transportation Security by the U. S. Department of Homeland Security. Significant technological improvements have been made, including campus wide connectivity, smart classrooms and wireless networks and the construction of the Bennie G. Thompson Academic and Civil Rights Research Center.

She is a member of the national board of directors for the United Negro College Fund, the National Association for Equal Opportunity in Higher Education, Council of Independent Colleges, the National Association for Independent Colleges and the Leadership Alliance and serves as Chair of the Council for Higher Education of the United Church of Christ.

Hogan was appointed by President Barack Obama to serve on the President’s Board of Advisors on HBCUs. Recently, she was selected by the Department of Defense to serve on the National Committee for HBCU/MI Programs.

She also is a founding member and former president of the Central Mississippi Chapter, National Coalition of 100 Black Women, and a member of the Links, Inc. and Alpha Kappa Alpha Sorority, Inc.

She spearheaded the implementation of online learning programs, developed internal fiscal accountability measures and served as a key liaison to local and national elected officials.

Glover began her full time academic career as chairperson of the accounting department at Howard University, in Washington, D.C., from 1990 to 1994. Prior to 1990, she served as chief financial officer and senior vice president of Metter Industries, was manager of investor relations for the Potomac Electric Power Company and as an accountant at Arthur Andersen in Memphis.

A licensed attorney and certified public accountant, she earned her bachelor’s degree in mathematics from Tennessee State University, an MBA from Clark Atlanta University, her J.D. from Georgetown University Law Center and her Ph.D. in business economics and policy from George Washington University.

She also served as the past president of the Beta Delta Omega Chapter of Alpha Kappa Alpha Sorority, Inc. in Jackson.

Atty. Carolyn House Stewart: Stewart of Tampa, Fla., is the International President of Alpha Kappa Alpha Sorority, Incorporated. Installed in St. Louis in July 2010, she is the first president to serve a full term in the Sorority’s second century and the first lawyer to head the organization.

Stewart’s program theme is “Global Leadership through Timeless Service.” Thusly, driven by this thematic call to action, the Sorority is continuing its 105-year legacy of providing service to all mankind.

Under her leadership, members of the Sorority have logged hundreds of thousands of volunteer hours serving in 964 communities all over the globe where it has chapters. This includes chapters in the United States, in Bermuda, Germany, Nassau, Japan, South Korea and on the continent of Africa.

The signature program initiative under Stewart’s administration is the Emerging Young Leaders program, targeting middle school girls. Its goal is to mirror the Sorority’s mission to cultivate leadership skills in young women so they can better meet the challenges of tomorrow. At the core of her initiatives are health care and the eradication of global poverty.

Her professional achievements have earned her numerous awards including the 2006 Florida Commission on the Status of Women “Achievement Award,” The National Bar Association Presidential Award and the Francisco Rodriguez Award from the George Edgecomb Bar Association.

The City of Tampa City Council issued commendations to Stewart in December 2010. She is listed in the 2011 Strathmore’s Who’s Who Worldwide Edition and was honored by the National Association of Outstanding Business and Professional Women.

The National Newspaper Publishers Association also recognized her for her leadership in November 2011.

In addition to her law degree, she holds a Bachelor of Arts in history and social science education from the University of South Florida.

On Tuesday, May 28, the newest marker on the Mississippi Freedom Trail was unveiled on East Capitol Street in downtown Jackson. The marker was erected at the site of the 1963 Woolworth’s store, where a historic sit-in by civil rights activists occurred.

Led by Tougaloo College students and faculty, the Woolworth’s sit-in on May 28, 1963, became one of the iconic moments of the Civil Rights movement.

A white mob threatened and attacked the activists and doused them with condiments over the course of several hours. Jackson Daily News photographer Fred Blackwell took images that, to this day, are synonymous with the movement and white resistance to it. […]