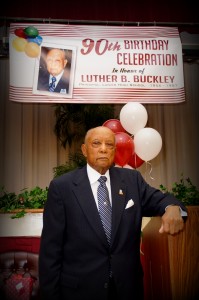 Frederick Douglass said, “It is easier to build strong children than to repair broken men.” In that spirit, Saturday, March 2, 2013, a tribute was held at Lanier High School honoring its retired principal Luther B. Buckley on the occasion of his 90th birthday.

Very few have “built stronger children” and put in action Douglass’ words better than Principal Buckley. Legendary for his embrace of all children, Buckley guided Lanier High School during the tumultuous Civil Rights era when “Separate but Equal” was the standard in Mississippi.

His calm demeanor protected the students, faculty and staff at Lanier High School when injustice was common place in the school system. Educating hundreds of children while instilling in them racial pride, good citizenship and high expectations, he led by example.

It did not matter whether you attended Lanier, for everyone knew Mr. Buckley. His quick humor and no nonsense administrative approach often seem at odds, even today. But you quickly realized that he was/is always teaching, whether it was with a joke or a serious rendition. He always made you think.

Principal Buckley always expected more from his students and parents, faculty and staff. He never assumed that his students were not the smartest and most able. He was convinced that his faculty could do more than anyone, even when they had less.

Because of his unquestioning belief that Lanier was the best school and was filled with the best students, the school enjoyed unparalleled success, not just in sports but in all aspects of school life.

The Parent Teacher Association was one of the largest active organizations in the city under his leadership. The band, choir, debate teams won numerous competitions. During the height of segregation, Lanier’s graduates attended some of the most prestigious schools in the nation.

As the son of one of his students, I grew up hearing the stories of Lanier and Mr. Buckley. As an adult, I have seen the impact Principal Buckley has had on this city and nation.

The honor bestowed on Mr. Buckley in recognition of his 90th birthday by his students, former faculty members, friends and family was well deserved. I am proud to join with his many other admirers in wishing Mr. Luther B. Buckley a very happy 90th birthday and many more.

a candidate for the City Council Ward 2 seat.

The month of October holds a special meaning for clergy across the country but for the pastor of College Hill Missionary Baptist Church, the month long celebration includes a special day of recognition. Not only is it National Clergy Appreciation Month, but it is also the month that Dr. Michael Titus Williams stepped into the pulpit as the pastor of one of the oldest African American churches in Jackson…. […]

Changing the lives of women through innovative surgical technique

Patricia Smith of Jackson juggled a full life as a wife, mother and talented cook. Last August, after living with the pain of endometriosis nearly half her life, Smith decided she had had enough.
“I lead a busy life, which didn’t… […]

Tuesday, Oct. 9, was a day described by several golfers as being ‘picture perfect’ weather-wise for being on the course playing. Yet it was a day that members of the NonIron Golf Club set aside to make a contribution to the Boys & Girls Club of Metro Jackson.

Members of the golf club gathered at the Sonny Guy Golf Course on Woodrow Wilson Drive in Northwest Jackson and participated in a media event by offering quick and helpful tips to some of the youth from the Boys & Girls Club before making the donation…. […]