Robert Williams, a 59-year-old disabled truck driver, is pleased that his home on Wood Street will be one of 21 that will receive major repairs as a result of a matching grant awarded to Habitat for Humanity/Metro Jackson (HFH/MJ).

Last fall, HFH/MJ was among nine affiliates nationwide invited to apply for one of four major Community Impact Grants from Lowes. On Friday, March 1, at a media event at Jaycee Park on Bailey Avenue, officials from Lowe’s announced that HFH/MJ, along with affiliates in Indianapolis, Ind., Portland, Org., and Charlotte, N.C., was chosen to receive a $250,000 matching grant.

Williams, the first homeowner in

Jackson to benefit from the grant, said, “I want to thank Habitat for this grant and I am very appreciative to everyone that is helping me.”

Currently, his roof leaks, many of the wood windows have rotted, the kitchen and bathroom floors are unstable, and the electrical wiring needs replacing. The home rehabilitation project will correct these and other problems.

Since 2003, Lowe’s has worked with Habitat for Humanity to build homes, communities and hope. There are four Lowe’s stores in the greater Jackson area – Jackson, Ridgeland, Flowood and Madison. All four stores were represented by managers and other staff members committed to providing employee volunteers and expertise to the MidCity/Georgetown rehabilitation grant project.

Jason Walker, manager of the Ridgeland store, said, “I look forward to getting my hands dirty and doing whatever it takes to make this grant project a success.”

The focus of this grant will be to expand the existing neighborhood revitalization project in the mid-city Georgetown area begun there by Habitat for Humanity/Metro Jackson. Using the grant funds from Lowe’s, HFH/MJ will assist 17 families with rehabilitation or new construction projects. This projectn moves the local Habitat affiliate closer to fulfilling its goal of serving 500 families over three years as a part of what is known as its Nehemiah Project.

Cindy Griffin, executive director of HFH/JM, said, “The Lowes Community Impact Grant will provide a broader and deeper impact on eliminating substandard housing and improve community development in this neighborhood.”

Four home renovations are planned for the first quarter of 2013, 12 critical repairs throughout the year, and the construction of a Leadership in Energy and Environmental Design (LEED) Platinum home in the fall of 2013.

Griffin said, “This grant from Lowe’s provides a huge boost, as we strive to broaden, deepen and quicken our work to eliminate poverty housing in the metro area. “Everyone,” she said, “deserves a decent place to live. When the walls are strong and the roof is secure, the family inside can focus more on thriving than surviving. We want all families in Jackson to thrive.”

Habitat is also looking for homeowners who need repair assistance in Fondren, Englewood Gardens and Midtown. Homeowners must qualify for the 0 percent interest loan or grant.

For information on receiving assistance or volunteering, please contact Habitat for Humanity/Metro Jackson at 601-353-6060. 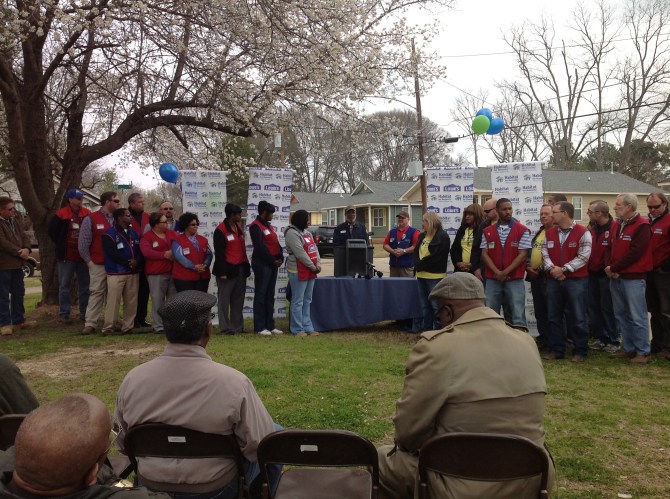 Representatives of the Jackson Lowe’s store