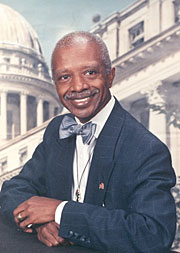 Senator Hillman Frazier, guest speaker for the morning event, said “I have never seen so many politicians in one setting at one time –  when it was not about running for office.” As the audience laughed Frazier said the special attendance was a result of the good things that were going on at Lester.

The school auditorium was filled to capacity at 9 a.m. as students and teachers showcased their various talents. Fifth grade student Monterriio Luckett served as program guide. Kindergarten student Kemourin Lewis held the mic with steady hands as he sang “It’s Another Day’s Journey.” The welcome was given by second grader Timothy Lewis, the pledge was lead by first grader J’Naya Taylor and fifth grader Janiya Harris introduced Frazier as the guest speaker.

Frazier started his message by asking who could define segregation? He was very pleased when Imani Gibbs, a fourth grader, who also gave the occasion, explained that segregation was when black people could only live in certain parts of town. It was a perfect response to what he was about to tell the young students.

His subject was “Yesterday.” He shared with the students how he had grown up in south Jackson where there were only two schools: one was Martin Elementary and the other was George

Elementary. He said George was the school for the white children and Martin was the school for the black children. He recalled how his teachers at Martin taught him the three r’s and so much more. He said he had very good teachers and because of what they taught him yesterday, he can serve them today in state government, making laws, for the state of Mississippi. Frazier rattled off the names of all his teachers from George. He said that even though the schools were segregated, the teachers did not use that as an excuse for not encouraging the students to do their best and though they were paid lower salaries than the teachers at Martin Elementary, his teachers still encouraged the students to do well and move forward.

Frazier said he came from a part of town referred to as Doodyville and from there came many successful doctors, lawyers, teachers, law enforcement officers and other great achievers. He said much of their success can be attributed to the great teachers they had in the segregated schools. Frazier said his teachers told them it’s okay to dream but not to daydream. He encouraged the teachers at Lester to tell students the same thing: to dream, rather than to daydream, and to set goals in life and to make those goals reality.

Frazier the students to move forward because one day they will be taking the places of the legislators, politicians and teachers. He told them to hug their teachers because it’s Valentine’s Day. He ended his speech by saying, “Thank God for all the teachers of yesterday, today, and for the teachers at Lester!” Frazier was given a standing ovation.

Principal William Merritt thanked Frazier for his encouraging words of wisdom. He also thanked all the special guests for attending the program. He recognized and thanked IMS teacher Emma Harris, chairman of the Black History Month Program, and her committee.

Harris has served as chair of the BHM program at Lester since its inception 15 years ago. She said she was very pleased with the program and stated, “I think everything turned out great. I am very appreciative of all the support and cooperation.” Harris said she was especially appreciative of Senator Frazier for agreeing to be their speaker and was grateful to Brandon Mitchell, Minister of Music at College Hill Baptist Church, for agreeing to serve as director of the Lester Teachers

Superintendent Gray in his remarks recognized Linda Rush, V.P. of the Board of Trustees for Jackson Public Schools and thanked all the special guests for attending. He said he was very grateful to Principal Merritt for all the great things he was doing at Lester and in the Jackson community.

Others appearing on program were Thaisaum Graves and Cierra Banks who together recited the poem “I Am Somebody.” Makayla Hodges, a junior at Terry High School, sang “Stand,” and Gale Bradford, office manager at Lester, sang “Yesterday.” Additional music was provided by the Lester Teachers Choir.

Choir director Brandon Mitchell surprised the audience by singing a melody of African folk songs during a brief delay in the program.

In a cash strapped district JPS continues to spend

Board of Trustees approves big-spending measures

Faced with questions about big spending in his former school district, Jackson Public Schools Superintendent Dr. Cedrick Gray vows to remain focused on JPS and moving this district forward. “I cannot afford to lose sight of what is before us, even with lingering questions,” Gray said. “Everything we did in Fayette County, Tenn., was above board and done with board approval.”

Last week Gray asked JPS board of trustees to approve hiring a financial team that would help with restructuring its debt and save the district money. Gray submitted to the board some background on the team and the reason he wanted to bring them on board. What he did not give them were hard cold numbers on cost or projected savings…. […]

Special to The Mississippi Link JACKSON – The Jackson Public Schools’ Board of Trustees has announced its finalists for superintendent of schools: • Dr. Dennis L. Carpenter, deputy superintendent for operations for the Newton County, […]