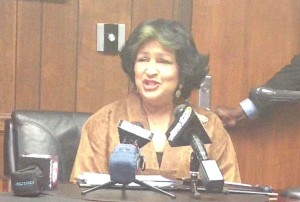 However, not everyone is excited about the planned expansion. Tulane University issued a letter to Higher Education Commissioner Hank Bounds and the College Board asking the board to rescind the approval of JSU’s plans to open a Madison campus this summer.

“Both Tulane and the city have a right to expect Jackson State and the Board of Trustees of Institutions of Higher Learning will respect state law before authorizing the establishment of an off-campus instructional program… The process and the law have both been disregarded in this case,” the letter states.

Tulane opened a Madison branch in 2010 after the city approached the New Orleans university about locating here. The branch is located in a former elementary school building owned by the city with an average enrollment of 230 students. It pays the city $1,000 a month in rent.

JSU officials see expansion into Madison as a great opportunity. “We’ve looked at the demographics of our area. The fastest-growing segment of learners is the 25- to 35-year-old group. These are the people who work, who have children but still have educational aspirations,” Meyers said.

“We want to enable them to conveniently have the opportunity to fulfill those aspirations through our programs at Jackson State University. This can be a valuable resource to developing a workforce for the whole state of Mississippi.”

Meyers said the purpose of the meeting was to discuss JSU’s plan for a Madison branch. Butler also was informed that the new location’s programs would be geared toward non-traditional students and that classes would start in the summer.

“That was a thrill for me. I have long admired her, and I’m impressed with her leadership. We shared our plan. We continue to look forward to a fruitful relationship with Madison, the surrounding counties and cities and the leadership,” Meyers said.

During the January 10 meeting, Butler asked the university to be mindful of the signage protocols within the city of Madison. Meyers said the university would respect all of the city’s signage regulations.

Meyers said she left the January 10 meeting with the impression the city supported the plan. No concerns or objections had been expressed, Meyers said.

On January 17, the College Board approved a 10-year, $1.5 million lease for 8,600 square feet in an office building at 382 Galleria Parkway in Madison for JSU to hold classes.

Since her meeting with JSU officials, Butler has expressed concern about the expansion into her city. She said that she was not told about the lease agreement during her meeting with Meyers. Butler said the city wants to make sure that JSU will not be competing for students with Tulane.

When she was told that Butler felt like JSU had “kind of” gone behind her back, Meyers answered that she had been trying to meet with her for over a month, that she hadn’t spoken to her since the January 10 meeting, and the IHS approval occurred on January 17.

Meyers said that she was “not sure” if JSU was offering the same courses as Tulane. She said the campus programming is still evolving and some of the programs offered will be selected, in part, based on how they tie into long-term, state economic development plans, such as Blueprint Mississippi. The focus could include health care administration, public policy and business. “As we learn more about the aspirations of the students in that area, we will try our best to accommodate them,” Meyers said.

Meyers also explained that the Madison location fits into the university’s enrollment management plan. She said the university would like to open other campuses throughout the metro Jackson area over the next three to four years to give the community more educational options.

When asked if she believed she still had the support of the city of Madison after hearing some of the natives’ concerns, Meyers said that she left the office (Mayor Butler’s) believing she had the city’s support for the expansion.

Myers said that she was “amazed” and “astounded” when she learned that the mayor did not realize that JSU was farther along in their expansion plans (had sought and received approval of the lease for the office space).

Mississippi Link Newswire JACKSON, Miss. – The Jackson State men’s basketball team will travel to Baton Rouge, La. to take on the Southern Jaguars in the first round of the 2018 Southwestern Athletic Conference Tournament […]

Jackson is not the only capital city suffering from massive flight to the suburbs or surrounding counties, and it is not the only city with shortfalls from a local tax base that would keep it viable and attractive for future and sustainable growth.

However, there are projects on the table that were initiated with the intent to “turn downtown Jackson around” and make it a great place to live in, shop in and do business in. Old Capitol Green, one of those projects, described its “master plan” for downtown Jackson development, positioned adjacent to the Old State Capitol…. […]

July 17, 2014 Online Editor News, The Buzz Comments Off on 4 more indicted on hate crime charges in 2011 attacks on blacks in Mississippi

JACKSON, Mississippi (AP) — Four more people have been indicted in what prosecutors say were a series of racially motivated attacks on blacks in Mississippi. John Louis Blalack, 20, of Brandon; Sarah Adelia Graves, 21, […]