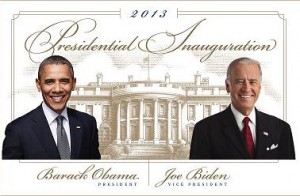 That was the theme of the 57th annual Presidential Inauguration Monday, with President Barack H. Obama being the 17th president to win a second term.

For more than 200 years, America’s citizens have witnessed the inauguration ceremonies of the President and Vice President of the United States. From the first inauguration of George Washington, in New York City, in 1789, till today, the swearing-in ceremonies represents both national renewal and a continuity of leadership.

Since 1901, the Joint Congressional Committee on Inaugural Ceremonies has been responsible for the planning and execution of the swearing-in ceremonies and the luncheon for the Inauguration of the President at the U.S. Capitol.

In two separate, private ceremonies, President Obama and Vice President Joseph R. Biden were officially sworn into office, marking the start of their second term. (The Constitution mandates that the President take the oath on Jan. 20. Since that date fell on a Sunday this year, the public inauguration ceremony and festivities took place on Jan. 21). 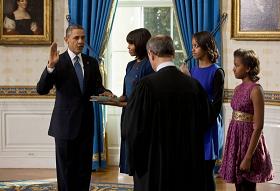 On Sunday, President Obama took the oath in a simple ceremony lacking all the pomp and circumstance of what was to come Monday. The oath was administered by Chief Justice John Roberts, in the Blue Room of the White House, using a bible that belonged to First Lady Michelle Obama’s paternal grandparents.

The President and Vice President also participated in a wreath laying ceremony at Arlington National Cemetery later that morning before attending an inaugural reception Sunday afternoon.

Monday’s inauguration was filled with all the enthusiasm and pageantry of the moment as hundreds of thousands of people filled the National Mall (millions more watched at home) to catch a glimpse of what could easily be described as lightning in a bottle – the first black president elected to head the United States government, again – while promising to defend the country and the Constitution.

The inaugural theme, “Faith in America’s Future” commemorated the United States’ perseverance and unity and marks the sesquicentennial year of the placement of the Statue of Freedom atop the new Capitol Dome in 1863.

Sen. Charles E. Schumer spoke at length of the statue throughout his welcoming remarks and what it means to Americans.

“This democracy of ours was forged by intellect and argument, by activism and blood…and above all…by a stubborn adherence to the notion that we are all created equal, and that we deserve nothing less than a great Republic worthy of our consent,” he said. “…The perfect embodiment of this unshakable confidence in the ongoing success of our collective journey is an event from our past. The improbable completion of the Capital Dome and capping it with the Statue of Freedom.”

The 19-foot, 15,0000 pound, colossal bronze State of Freedom is the figure of a woman wearing a military helmet, holding a sheathed sword in her right hand and a laurel wreath and shield in her left.

The building of the statue, ironically, was completed by a former slave, master craftsman Phillip Reid, after the original foreman went on strike demanding higher wages.

Schumer, Chairman of the Joint Congressional Committee on Inaugural Ceremonies, said Abraham Lincoln’s insistence that the half-finished dome of the Capitol be completed amidst the nation’s then adversity, was symbolic of America’s resilience.

“In 2013, far too many doubt the future of this great nation and our ability to tackle our own eras half-finished domes,” he said. “…When thoughts like these produce anxiety, fear and even despair, we do well to remember that Americans have always been and still are a practical, optimistic and problem solving people. And that as our history shows, no matter how steep the climb, how difficult the problems, how half-finished the task, America always rises to the occasion. America prevails and America prospers…and it is the perfect moment to renew our collective faith in the future of America.”

Schumer was followed by Mrs. Myrlie Evers-Williams, who was reportedly the first woman and the first non-clergy member, to offer the invocation or public prayer at an inaugural ceremony.

Evers-Williams, who served as the chair of the NAACP from 1995 to 1998, fought for 30 years to bring her husband’s assassin to justice. She continues to work to preserve his legacy and currently serves as a distinguished scholar at Alcorn University in Lorman, Mississippi.

In her invocation, Evers-Williams, also spoke of the hope of America.

“We are here to ask blessings upon our armed forces, blessings upon all who contribute to the essence of the American spirit, the American dream. The opportunity to become whatever our mankind, womankind, allows us to be. This is the promise of America,” she said. “As we sing the words of belief, “this is my country,” let us act upon the meaning that everyone is included. May the inherent dignity and inalienable rights of every woman, man, boy and girl be honored.”

Forever a champion of civil rights, Evers-Williams also expressed an appreciation for the soldiers of justice, including her first husband, who are buried in Arlington Cemetery, just four miles from where the inauguration was held.

“They who believed, fought and died for this country. May their spirit infuse our being to work together with respect, enabling us to continue to build this nation, and in so doing we send a message to the world that we are strong, fierce in our strength, and ever vigilant in our pursuit of freedom.”

The remainder of the program included: A musical selection by the Brooklyn Tabernacle Choir; the administering of the Oath of Office to Vice President Joe by Associate Justice of the Supreme Court, The Honorable Sonia Sotomayor; a musical selection by James Taylor; the reading of a poem by Richard Blanco and the singing of the national anthem by Beyoncé.

After taking his oath of office administered by the Chief Justice of the United States, The Honorable John G. Roberts, Jr., President Obama delivered his second and last inaugural address.

In it, he vowed to continue what he started four years ago, not alone, but with the aid of every U.S. citizen.

“This generation of Americans has been tested by crises that steeled our resolve and proved our resilience,” the president said. “ A decade of war is now ending.  An economic recovery has begun. America’s possibilities are limitless, for we possess all the qualities that this world without boundaries demands:  youth and drive; diversity and openness; an endless capacity for risk and a gift for reinvention.  My fellow Americans, we are made for this moment, and we will seize it – so long as we seize it together.”

The president concluded his speech by saying that every American has the obligation to “shape the debates of our times”, “embrace what is our lasting birthright” and the “power to set this country’s course.”

Evers-Williams, 79, is the keynote speaker and her theme is: “Coming together, moving forward.”

“A Past to Cherish…. A Future to Fulfill” is the theme, and the meeting will be held at the Marriott Marquis Atlanta. […]

WASHINGTON (AP) — The Obama administration declared its support Thursday for requiring women to register for the military draft, a symbolic but significant shift that reflects the U.S. military’s evolution from a male-dominated force to […]

May 27, 2014 Online Editor News Comments Off on Obama leads country in celebrating Memorial Day, U.S. at ‘a pivotal point’ in Afghanistan