JACKSON – The last remaining inmate mistakenly released from the Hinds County Detention Center is back in custody, WLBT reported.

Murder suspects Travin Ladarius Bell and Edd Burrell and aggravated assault suspect Roddrick Raheem Jones are also back in custody after being free for five days when the inmates were released by mistake on Dec. 6.

The Hinds County Sheriff’s Department said in a news release that their department “received several court orders between Sept. 4 and Sept. 21 from the county courts that indicated some of the detainees should or would be released by Dec. 1 if indictments had not been placed or brought against them,” the release said. 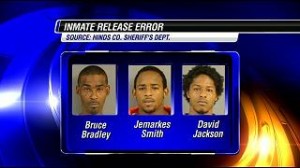 In an effort to keep the public more informed as to their actions and initiatives, Captain Joseph Daughtry, of the Hinds County Sheriff’s Department said the mistake was a case of “human error” where a jailer did not fully read a court order demanding the release of the inmates who had not been indicted by Dec. 1.

A seventh inmate, a murder suspect, was also on the list to be released, but he remained behind bars.

Daughtry said there is no indication that any of the inmates committed crimes while they were free.

“Once we were notified of our mistake, an ‘all hands on deck’ approach… ensued,” he said. “As a team, we created and implemented a strategy of priority to recapture and rebook those detainees.”

Daughtry said their first priority was to ensure that those detainees that were being held on charges of violent behavior, including murder, were brought back into custody as soon as possible.

“We successfully did this within three hours,” he said.

As to the other inmates released, Daughtry said: “The department is looking into how this happened and there [will] be disciplinary action. We are also reviewing and analyzing our internal process. Once a complete investigation is done, I’m confident that we will implement new policies and procedures.”

Lewis: ‘The situation was contained early as we prepared to take over’ By Othor Cain Managing Editor In the early morning hours of Monday, July 30, during a routine security check, officials at the Hinds […]