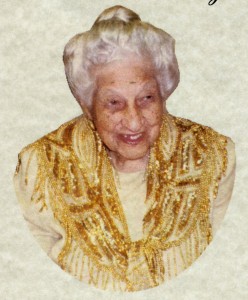 Nettie Williams was born  Oct. 31, 1899, in Farmhaven, Miss., the youngest child of Rev. Allen and Mary Williams. During her early childhood, she was required to attend school because her parents realized the importance of acquiring a good education to equip her to read the Bible and other literature that would provide essential knowledge, principles and values for her Christian life.

She married Sulm Whittington and their union was blessed with 11 children. In 1946, tragedy struck and her husband died unexpectedly. She was left to raise nine of their 11 children on her own. Two older children were married and living on their own.

By faith, she worked relentlessly and was able to maintain the farm that she and her husband acquired. She later married Eugene Hart, though he too died unexpectedly after six months of marriage.

Nettie was a gifted cook and loved making her famous chicken soup and egg pie. She was industrious and giving. Her superb handiwork was evident in her handmade quilts and dolls. She also made pillows and flowers and sewed clothes for the community and family.

Being a truce centenarian, she made appearances in Jet Magazine, appearances on the Oprah Winfred Show, had a photo appearance on the Today Show with Willard Scott and met President Bill Clinton.

At the age of 107, she was still attending church every Sunday and caring for her own basic needs. She still maintained a flower garden.

Nettie was the eighteenth oldest person in the world and validated and listed on the International List of Super Centenarians. She contributed her longevity to her faith, obedience to God’s Word and adherence to her parents’ teachings.

Her oldest child, Flossie Davis, 90, spoke at the funeral, stating that her mother was only 22 years older than her and a devout mother to her children.