From The Hattiesburg American

HATTIESBURG – Authorities in Hattiesburg have secured a warrant for a woman they believe shot her neighbors Monday, killing one and leaving another seriously injured. 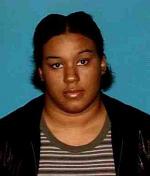 Tamira Peoples (pictured) is wanted in connection with a fatal shooting in Hattiesburg.

Hattiesburg Police Department spokesman Lt. Jon Traxler said they are looking for Tamira Peoples, 37, in association with a shooting at the Briarfield apartments near the corner of East Second and Gordon streets.

Traxler said dispatchers received a call reporting shots fired around 10:30 a.m. Shortly thereafter, police arrived at the scene in search of a suspect, donning ballistic vests as they searched the area armed with tactical rifles.

The crime scene constantly expanded as officers with rolls of yellow tape pushed onlookers farther and farther away from the complex’s E building as they annexed the scene piece by piece until it stretched around the corner of East Second and Gordon down Bouie Street.

Investigators believe the shooter stood in the stoop area of the apartment next to Peoples’ in the E building when the shooting took place, Traxler said.

“She was right inside the door in the apartment,” he said.

The state crime lab in Jackson is performing an autopsy on Gholar, the preliminary results of which should be complete sometime today, Benedict said.

She is currently under the care of a local hospital in “stable” condition, Traxler said.

Peoples is believed to have left the crime scene with her 3-year-old son, Robert Williams Jr. Traxler said investigators are narrowing down possibilities as to the suspect’s location.

“We’re trying to follow up on some leads and locate her,” he said.

“That’s what we’re still trying to get to the bottom of,” he said.