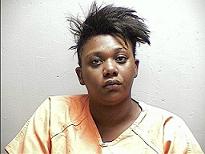 Johnnetta White, 23, of Camden, appeared in Madison County Circuit Court for sentencing after having previously entered an open plea of guilty to one count of insurance fraud.

Judge John H. Emfinger sentenced White to three years in the custody of the Mississippi Department of Corrections (MDOC) with two suspended, one to serve. White was also ordered to make restitution to Allstate Insurance in Ridgeland in the amount of $2,720, to reimburse the State of Mississippi’s General Fund in the amount of $3,250 for the cost of the investigation and to pay court costs in the amount of $498.50. White must also serve five years on post release supervision upon her release from custody.

White admitted in court that she fraudulently filed a second insurance claim, on damages she had already filed for, following what is believed to have been an accidental collision. White admitted to reporting, on the second claim, a fake cause as to how the damages occurred.

“We thank Judge Emfinger for sending the message that there is a price to pay for such deceit,” said Attorney General Hood. “This defendant will pay behind bars and then either make right with restitution or face even more time behind bars.”

The Associated Press Here are some news and notes from around Mississippi: In Olive Branch, city officials acted swiftly to do something about their beaver overpopulation, which could lead to a flooding problem if left […]

Toyota agreed to pay $29 million to settle consumer protection claims and has agreed to provide additional restitution and incentives to vehicle owners to promote compliance with unintended acceleration safety recalls. As a result of the settlement, Mississippi will receive $561,288.60 and Toyota will be restricted from advertising the safety of vehicles without sound engineering data to back such safety claims.

The states are alleging that Toyota engaged in unfair and deceptive practices when it failed to timely disclose known safety defects with accelerator pedals. […]

From The Mississippi Link Newswire JACKSON – Two of Mississippi’s deadbeat parents have answered in court, in separate cases, after failing to support their children, Attorney General Jim Hood said. Sha M. Helton, 46, of […]