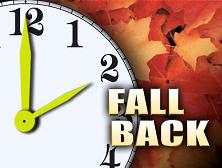 Daylight-saving time ends at 2 a.m. Sunday, Nov. 3. Don’t forget to set your clocks and watches back one hour before you go to bed Saturday night.

According to dayfinder.com, the reason for day-light saving (DST) 2012 is to increase the period of light during the afternoon while decreasing the hours of daylight in the mornings.

The practice of DST has its benefits and problems. Adding light to the afternoon benefits after work activities and also has an economic benefit to retailers that prosper during daylight hours. However, DST can be problematic for timekeeping, travel and sleep cycles.

Though mentioned by Benjamin Franklin in 1784, the modern idea of daylight saving was first introduced in 1895 by George Vernon Hudson, a New Zealand entomologist.

During 1916, Germany and its allies in World War I were the first countries to adopt day-light saving time to ensure consistent railroad times and limit coal usage.