Sandy was called a category 1 storm, but no such storm like her had ever been seen on the east coast. A category 1 storm is usually mild, compared to the dreaded category 3 storm.

Stretching over an area of 1,000 miles with a full moon at her back, meeting a cold front coming in from the north, Sandy delivered devastation unseen on the eastern shores. 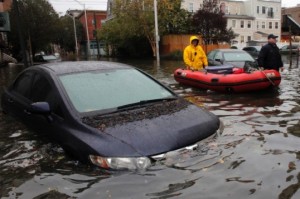 Eighty to 100 homes surrounded by water burned to the ground in Breezy Point, N.J.  most of which were homes owned by firefighters; Levies broke at Little Ferry, N.J., forcing water into homes and residents to their roofs. In Seaside Heights and Seaside Park, N.J., flood waters carried sand into homes located blocks away from the shore.

Transformers exploded in air; a tanker was washed ashore; and a luxury boat landed on railroad tracks. There were one million students out of school, 2.6 million households without electric power, 60 state roads closed, a $50 billion recovery tab expected, and reportedly up to 50 people dead.

Sandy was the great neutralizer. Mayor Corey Booker of Newark, N.J., said, “Nobody is stopping to ask what is your religion or what is your political party. They are just rolling up their sleeves and helping each other. The storm has passed but the challenges remain.”

New Jersey Gov. Chris Christie said, “I’ve never seen sights like this in my life in New Jersey. I can only say we have to suck it up and move on. People are really hurting; it will be a day of sorrow when the sun comes up. But mixed with the sorrow will be determination.”

The Republican Christie then drew ire as he praised Democrat President Barack Obama for his immediate response to the needs of the people in the area. “This is more important than any election,” Christie said. “This is for the people, not for an election. We are in a time of crisis.”

He urged parents to lower their children’s anxiety. “Tell them they are safe and will be taken care of,” Christie said. “This place will never be the same. This has changed lives. We will rebuild but there is a sadness.”

Inspite of Sandy, babies were still born and rainbows still sprung above the devastation. 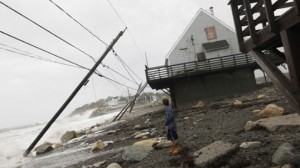 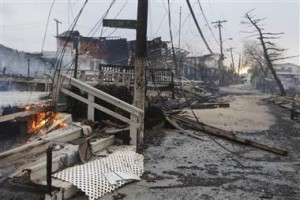 After 1st Ebola case in NYC, 3 others quarantined

October 24, 2014 Online Editor Health, News Comments Off on After 1st Ebola case in NYC, 3 others quarantined

By JONATHAN LEMIRE and COLLEEN LONG NEW YORK (AP) — A doctor who became New York City’s first Ebola patient was praised for getting treatment immediately upon showing symptoms, and health officials stressed that the nation’s most populous […]

President Obama is Time’s ‘Person of the Year’

President Barack Obama has been named Time magazine’s “Person of the Year” for 2012.

“We are in the midst of historic cultural and demographic changes, and Obama is both the symbol and in some ways the architect of this new America,” Time Editor Rick Stengel told NBC’s “Today” show, where he announced the selection on Wednesday. […]

A group of black journalists says it is disappointed in the lack of ethnic diversity among the people chosen to moderate presidential debates.

The National Association of Black Journalists (NABJ) said Friday that the Commission on Presidential Debates needed to stop treating black reporters and other minority journalists as if they were unqualified, invisible or both. […]