DETROIT – (AP) Emanuel Steward, earnest yet easygoing, proved rough and tough wasn't the only way to win in boxing. 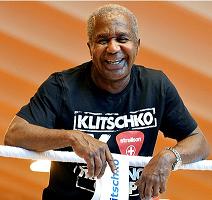 With a twinkle in his eyes, a smile on his face and a soothing voice, Steward developed unique bonds in and out of the ring with a long line of champions that included Thomas Hearns, Lennox Lewis, Oscar De La Hoya and Wladimir Klitschko.

Steward, owner of the Kronk Gym in Detroit and an International Boxing Hall of Fame trainer, died Thursday. He was 68. His executive assistant, Victoria Kirton, said Steward died Thursday, Oct. 25 at a Chicago hospital reportedly from complications following surgery for the stomach disorder of diverticulosis.

“It is not often that a person in any line of work gets a chance to work with a legend, well I was privileged enough to work with one for almost a decade,'' Klitschko said Thursday. “I will miss our time together. The long talks about boxing, the world, and life itself. Most of all I will miss our friendship.''

Steward, whose father was a coal miner and mother was a seamstress, was born in West Virginia. He got boxing gloves as a Christmas present at the age of 8, the start of what would become a long career in the sweet science.

He moved to the Motor City just before becoming a teenager and trained as an amateur boxer at Brewster Recreation Center, which once was the home gym of Joe Louis.

Steward, at the age of 18, won the national Golden Gloves tournament as a bantamweight. Instead of trying to make it as a professional boxer, he went to work for the Detroit Edison Co. and in 1971 accepted a part-time position as head coach – for $35 per week – of the boxing program at the Kronk Recreation Center.

A dynasty was born.

The Kronk's first professional champion was Hilmer Kenty, a lightweight from Columbus, Ohio, who started training there in 1978 and won the WBA title two years later.

But It was Hearns who really put Kronk – and the trainer known as Manny – on the map. The boxer known as Hitman was the first man to win titles in four divisions – he won five overall – and topped his 155-8 amateur record by going 61-5-1 with 48 knockouts as a pro.

Even though Steward had a lot of success with Hearns, some of his setbacks from his corner were among the most memorable in the sport. Hearns was knocked out in the 14th round by Sugar Ray Leonard in 1981 – Steward said that was the most painful experience of his life – and Hearns was on the short end of a three-round fight with Marvin Hagler in 1985 that is considered one of the best bouts in boxing history.

“He brought the very, very best out of me,'' Hearns once said of Steward.

Steward trained, helped train or managed some of the greatest fighters – and some kids who just needed to get off the streets – of the past 40 years out of Kronk and in other facilities across the globe, putting fighters from many countries in red and gold trunks.

“Lennox used to say when fighting as an amateur that everyone was afraid of the Kronk guys,'' Steward once said. “He saw the respect when they saw the colors.''

The gym for years was seen as a way to keep kids out of trouble in southwestern Detroit.

“A lot of these kids would be in the streets,'' Steward once said. “They live for this.''

And, Steward lived for it, too.

He loved boxing – and boxers – but like the Motor City, the gym he adored fell on hard times.

The city closed the original Kronk Recreation Center – a hot, sweaty basement gym – after vandals stole its copper piping in 2006. It was allowed to remain open, but it put Steward in a difficult financial situation and he later rented space at a gym in Dearborn so his young fighters could train.

“With the loss of Emanuel Steward, we have lost a true Detroit icon,'' Detroit Mayor Dave Bing said. “Emanuel Steward embodied our city's toughness, our competitive spirit, and our determination to always answer the bell.

“We are grateful for Emanuel Steward's many contributions to our city and his impact on generations of young people.''

In the early years at Kronk, most of his fighters were black. In recent years, his melting pot of boxers included a Ukrainian heavyweight, an Irish middleweight and scores of young men from Eastern Europe, Latin America and the Middle East.

Steward was inducted into the International Boxing Hall of Fame in 1996.

“It brings me great grief and sadness to hear of the passing of one of the best and most respected trainers of this era,'' De La Hoya said. “I learned a lot from him during our professional relationship and I will be forever grateful for his help during that time. We were also friends and I know I am going to miss him as so many others will, too. He was an important part of our boxing community.''

Lewis, a former heavyweight champion, was trained by Steward from 1994 to 2004, a period which included victories over Evander Holyfield and Mike Tyson.

“This has been a very tragic year for the boxing world, but today we've truly lost one of its crown jewels,'' Lewis wrote on his official website. “Manny always told me I was the best, but the truth is, he was the best and I'm grateful, privileged and honored to be counted among his many historic successes.

“Manny was giving, selfless, compassionate and stern,'' Lewis said. “I'm proud to have had him in my corner for so many years. … I'll miss his smile, his frank no-holds-barred truthfulness and our discussions on boxing and life.''

Steward also worked Klitschko, the current heavyweight champion, as recently as July when the boxer led 22,000 fans in singing “Happy Birthday,'' to the beloved trainer.

“His spirit is always here,'' Klitschko said. “I can hear his voice in sparring while doing things, whispering in my ear. As the famous saying goes, `The show must go on,' and that's exactly the case.''

Steward also trained actor Wesley Snipes for his role as a boxer in “Undisputed'' and appeared briefly with Lewis in “Ocean's Eleven.''

Steward worked since 2001 as a boxing analyst for HBO, sharing his rich knowledge of the sport and warm personality with a younger generation of fans.

“Manny was a respected colleague who taught us so much not only about the sweet science but also about friendship and loyalty,'' HBO Sports President Ken Hershman said. “His energy, enthusiasm and bright smile were a constant presence. Ten bells do not seem enough to mourn his passing.''

HBO Sports commentator Jim Lampley – a friend of Steward's since the early 1980s and broadcast partner for more than a decade – said Steward's wisdom and common touch made him special.

“He was the most loyal, generous, positive spirited, broadly accepting man I've ever known,'' Lampley said. “He had a positive impact on everyone he encountered.''

NEW YORK (AP) — The champ returned to the Garden, and it sounded and felt like Kiev. Ukraine’s Wladimir Klitschko easily outpointed a game-but-outclassed Bryant Jennings in the champion’s first fight in the United States […]