MEMPHIS, Tenn. – An earthquake that occurred eight miles underground Monday was strong enough to rumble the Memphis area and big enough to be felt in north Mississippi. 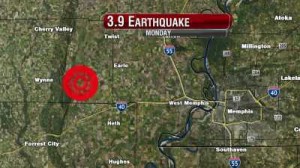 The U.S. Geological Survey, the government agency that keeps data on quakes, says the epicenter was about six miles southwest of Parkin, Arkansas, which is about 40 miles west of Memphis. The quake was 23 kilometers below the surface and measured 3.9 on the Richter scale.

Don Blakeman, Geophysicist for the National Earthquake Information center tell us there is a slight risk for other earthquakes because of the possibility of aftershocks.

“It doesn't mean there is necessarily a greater risk of having a really large earthquake. It is a possibility, but typically a very low possibility. It would not surprise me if we had a couple of little aftershocks from this one.”

A 3.9 can do moderate damage. In recent quakes in Oklahoma, several homes were totaled after quakes in the 4.0 range. So far, no significant damage was being reported.

Mississippi has felt some other quakes recently, originating near the same area. A small quake was reported October 10. That was a 2.3.

Several Memphis residents were chattering on social media about the several seconds of tremors that shook Midtown Monday morning.

“About 8 minutes ago, felt about 8-10 seconds of tremors in midtown,” tweeted @JeffGinMEM around 7:50 a.m. Monday.

Memphis resident Jada Love posted on her Facebook, “Did anyone else in Midtown Memphis feel earthquake tremors…?”

Tiffany Renee Daniel responded, “I’m in Southaven and I swear I just felt something too I was just sitting here trying to explain it away.”

Mississippi's Delta region is affected infrequently by the New Madrid fault, which produced four of the country's most notorious earthquakes in 1811 and 1812. One of the quakes was estimated to have been a magnitude 8, originating in northeast Arkansas and severely affecting what would become the Memphis area. It could be felt as far away as New York City.

MEMPHIS, Tenn. (AP) – Thousands of devotees converged on Graceland to mark the 35th anniversary of Elvis Presley’s death and got a surprise welcome from the King’s former wife and daughter, the first time Priscilla and Lisa Marie Presley have appeared together at the annual gathering.
The two women appeared on an elevated stage in front of the crowd Wednesday night, the eve of the Aug. 16 date when the rock and roll icon died at home in 1977 from a heart attack after battling prescription drug abuse.
Elvis was born in Tupelo, Miss. […]

GREENVILLE – (AP) As the City of Greenville begins to improve everything from streets to vacant buildings, it also is working to revamp the city’s website in an attempt to make it the news hub […]