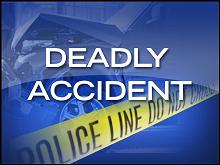 OKTIBBEHA COUNTY – Oktibbeha County investigators are trying to determine whether alcohol was a factor in a one-car accident early Saturday morning that killed one man and injured three others.

Coroner Michael Hunt identified the victim as 37-year-old James William McCloud of Louisville. Hunt says McCloud was a passenger in the back seat.

Oktibbeha County Sheriff Steve Gladney says the car was southbound on Oktoc Road when the driver lost control, ran off the road and flipped over in a ditch.

The driver, and two other passengers were injured. One was airlifted to North Mississippi Medical Center, and the other two were taken by ambulance. The names of the others injured has not been released.

Hunt says the four were on their way to Louisville at the time.

Madison County officials say a 44-year-old man has died in a fire at his Gluckstadt home.

Emergency Management Director Butch Hammack says Billy Murphy was trapped by flames in the house fire that started at about 11:45 p.m. Wednesday. Another man, whose name was not available, escaped without injury. […]

It was hard to tell whether Mississippi coach Hugh Freeze was more excited or relieved. But he took a moment to confirm the results on the scoreboard before heading to the locker room.