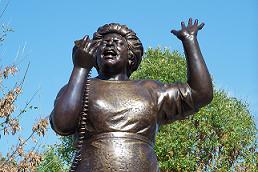 RULEVILLE – Slowly but surely, admirers and supporters of the late Fannie Lou Hamer say she is finally getting the recognition and honor she deserves.

Hamer’s memory was elevated – literally – on Friday, Oct. 5, when a statue of her likeness was unveiled during a ceremony in the small town of Ruleville in Sunflower County, Miss.

Hamer was born in 1917 to sharecroppers and later worked as one and a timekeeper on a plantation in Sunflower County. She helped organize the racially diverse Mississippi Freedom Democratic Party (MFDP) which challenged the seating of an all-white Mississippi delegation at the 1964 Democratic National Convention. She was also instrumental in the modification of the Voting Rights Act of 1965.

Hamer is best known for describing her feelings about the oppressive segregation she had grown up with in the south by saying: “I’m sick and tired of being sick and tired.”

At the time of her death, on March 14, 1977, Hamer was almost penniless, and yet, her funeral was well attended by celebrities, social activists and political leaders from all walks of life.

Senator Willie Simmons, who attended the unveiling ceremony and Hamer’s funeral in 1977, spoke of the lasting impression Hamer had on all she met.

“Ruleville had probably never seen [those] kind of individuals, that number of individuals coming into it,“ he said. “But they came to pay their respect to the lady that was being put to rest on that Good Friday, and here we are again gathered at this time, to allow her to rise and continue her work. We stand to reflect and honor this great lady.”

Two years in the making, the statue, designed by sculptor Brian Hanlon, depicts Hamer in a famous pose speaking through a megaphone to a crowd of supporters during a political rally.

The bronze statue stands on a 4-foot platform of marble with three pictures of Hamer throughout her struggle and three of her quotes, including the one which inspired the statue: “I’m never sure when I leave home whether I’ll make it back or not…but if I fall, I’ll fall five feet and four inches forward for freedom and I’m not backing off it!” 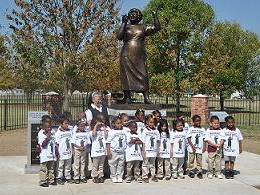 “Do you know how special Ruleville is?,” Malveaux asked the crowd. “Let me tell you one reason why Ruleville is so special. Fannie Lou Hamer is only the fourth African American woman to have a free standing statue in her name…and that’s history. And I believe people will come here…as a result that this is here.”

The statue was placed in the Fannie Lou Hamer Memorial Garden in the 700 block of Byron Street where a Mississippi Freedom Trail Marker honoring Hamer was placed earlier last year.

Hamer and her husband, Perry “Pap” Hamer are buried in the park.

Others on the program included Hamer’s oldest daughter, Vergie Hamer Faulkner, who sang a freedom song and spoke of the unity of her adoptive parents.

Reena Evers-Everette, daughter of the late Medgar Evers, also attended the unveiling and commented on the strong connection her family has with Fannie Lou Hamer.

“I think it’s a marvelous experience to expand history into all of the universe, especially so that all the generations will recognize all the foot soldiers that have made such an important impact on all of our lives,” Evers-Everette said. “And Fannie Lou Hamer has always been a ‘shero’ of mine, and the whole family has been so special to the Evers’ family. And the connection is unbelievable. The purpose of life is unbelievable, and we just want it to continue through all generations.”

It was hard to tell whether Mississippi coach Hugh Freeze was more excited or relieved. But he took a moment to confirm the results on the scoreboard before heading to the locker room.

Four and a half decades of service to children at heart

The Friends of Children of Mississippi (FCM), with its executive director from its inception Dr. Marvin Hogan still at the helm, celebrated its 46th Anniversary Monday, Oct. 15.

“Forty-five years ago, there appeared to be very little concern about poor children and families, and Head Start services were not readily available,” said Hogan, in assessment of the four and a half decades he personally has dedicated to child welfare…. […]

Mississippi returns to its roots with new Teaching Garden initiative

Davis Magnet Elementary School set the new pace for changing the trend that shows Mississippi as the leading state in obesity and in food insecurity, when it became the first school in Mississippi to receive a Teaching Garden, piloted by the American Heart Association (AHA) last year on a national level.

The American Heart Association’s Teaching Gardens program selected Davis, thanks to a sponsorship by the Jackson Heart Foundation. This program uses a school garden to teach students about nutrition and inspire them to eat more fruits and vegetables…. […]