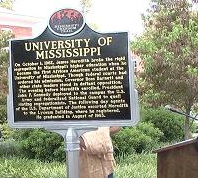 “It’s important for our students today to be reminded of the sacrifices made by people like James Meredith so that they (the students) can have a better life. We are a better society because of those sacrifices,” said Daniel Jones, chancellor of the University of Mississippi.

Meredith indeed was a trailblazer for African-Americans at the University of Mississippi. Now 50 years later with about 21,500 students, 17 percent of them are African Americans.

His marker is located at the corner of the Lyceum, the main administrative building on campus. The Mississippi Freedom Trail is a cultural initiative designed to honor the state’s civil Rights Heritage.

“This is the seventh marker,” said Sarah McCullough with the Mississippi Development Authority. “We think this may be Mississippi’s history. It’s actually America’s history. We sometimes forget the significant role Mississippi plays in the history of this country,” said McCullough.

For brothers Keven Wooten and Keithdrick Mack, the marker serves as a reminder of the past, the present and the future.

“By seeing this going to class, you know how it gets hard sometimes in school, and you want to give up on work, but you can’t slack up none. James Meredith didn’t, and he had cherry bombs and stuff at his door,” said Wooten.

“It gives me great joy that I have an opportunity now,” said Mack. “It gives me motivation to not to take it for granted and really embrace this opportunity.”

For transfer student Correl Hoyle, the marker gives him courage. He said he was one of only five African-Americans in his high school graduating class. Of those five, he said he’s the only one in college.

“(Meredith) He was the beginning of what most of us would consider an opportunity. I hope my education will inspire more people in my hometown,” said Hoyle.

OXFORD, Miss. (AP) — The University of Mississippi quietly removed the state flag from its place of honor on Monday, heeding the calls of those who say the banner’s Confederate battle emblem is harming the […]

Authorities said a nurse from Arkansas was killed in a traffic accident Monday after the vehicle she was riding in ran off the roadway and landed in a creek.

Coroner Alan Gurley said the woman has been identified as 59-year-old Linda White of Osceola, Ark. […]