JACKSON – While Houston Stackhouse never became a major name in the blues, he still played an influential role in the history of the Delta blues as a sideman and mentor.

A Wesson, Miss. native, Stackhouse will be honored today with a marker on the Mississippi Blues Trail at 2 p.m. in his hometown. The unveiling will take place at 1047 8th Street. This is the 162nd marker on the blues trail.

Born Houston Goff, Stackhouse was the son of Garfield Goff. He was raised by James Wade Stackhouse on the Randall Ford Plantation, and Stackhouse only learned the details of his parentage when he applied for a passport in later life.

Relocating in his teenage years with his family to Crystal Springs, Miss., he became inspired listening to records by Blind Blake, Blind Lemon Jefferson, Lonnie Johnson and local musicians. By the late 1930s, Stackhouse had played guitar around the Delta states and worked with members of the Mississippi Sheiks, plus Robert Johnson, Charlie McCoy and Walter Vinson. He also teamed up with his distant cousin, Robert Nighthawk, whom he taught how to play guitar. Originally a fan of Tommy Johnson, Stackhouse often covered his songs. In 1946, Stackhouse moved to Helena, Ark., to live near Nighthawk, and for a time was a member of Nighthawk’s band, playing on KFFA radio.

He split from Nighthawk in 1947 and alongside the drummer James “Peck” Curtis, appeared on KFFA’s “King Biscuit Time” program, with guitar player Joe Willie Wilkins plus pianists Pinetop Perkins and Robert Traylor. Sonny Boy Williamson II then rejoined the show, and that combo performed across the Delta, using their radio presence to advertise their concert performances. 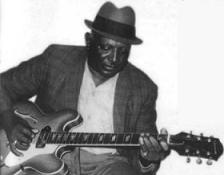 Between 1948 and 1954, Stackhouse worked during the day at the Chrysler plant in West Helena, Ark., and played the blues in his leisure time. He did not move from the South, unlike many of his contemporaries, and continued to perform locally into the 1960s with Frank Frost, Boyd Gilmore and Baby Face Turner. In May 1965, Sonny Boy Williamson II, who was by then back on “King Biscuit Time,” utilized Stackhouse when he was recorded in concert by Chris Strachwitz of Arhoolie Records. The recording was issued under Williamson’s name and entitled “King Biscuit Time.” Shortly afterwards, Williamson died, but Stackhouse continued briefly on the radio program, back in tandem with Nighthawk.

In 1967, George Mitchell recorded Stackhouse in Dundee, Miss. Named the Blues Rhythm Boys, Stackhouse was joined by both Curtis and Nighthawk, although the latter died shortly after the recording was made. Another field researcher, David Evans, recorded Stackhouse in Crystal Springs, Miss., but by 1970 following the deaths of both Curtis and Mason, Stackhouse had moved on to Memphis, Tenn. There he resided with his old friend Joe Willie Wilkins and his wife Carrie. At the height of the blues revival, Stackhouse toured with Wilkins and the Memphis Blues Caravan and appeared at various music festivals. His lone trip overseas saw Stackhouse play in 1976 in Vienna, Austria.

Earlier in February 1972, Stackhouse recorded an album titled Cryin’ Won’t Help You. It was released on CD in 1994. Stackhouse returned to Helena, where he died in September 1980, at the age of 69.

Louisiana man wanted for killing his father arrested in Miss.

A man arrested Tuesday morning in Mississippi for a Louisiana killing has confessed, authorities say.

JACKSON, Mississippi (AP) — Only two photographs of bluesman Robert Johnson — said to have sold his soul to the devil for his guitar talent — are known to exist.

One, known as the “studio portrait,” was made for Johnson by Hooks Brothers Studios in Memphis, Tenn. The other, referred to as “the dime store portrait” or “the photo booth self-portrait,” was taken by Johnson himself.

Greenville Mayor Chuck Jordan announced his resignation Wednesday. He said he made the decision after learning he has pancreatic cancer.

Jordan, a retired banker, was elected mayor in December after defeating Democrat Carl McGee. He was inaugurated on Jan. 3… […]