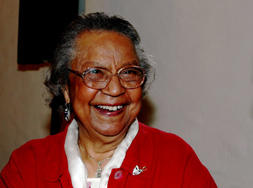 NEW YORK – (AP) Dorothy Carter, a former stage actress who starred in the adaptation of the groundbreaking novel “Strange Fruit” on Broadway and later became an educator and a children’s book author, has died after battling bladder cancer. She was 94.

Carter, born in 1918 in Kissimee, Fla., studied drama at Spelman College and later was taught by Stella Adler in New York. She made her Broadway debut in 1945 in Lillian Smith’s adaptation of her novel “Strange Fruit,” an interracial love story.

The show, directed by Jose Ferrer and starring Jane White and Earl Jones, closed after 60 performances but got a positive write-up by then-first lady Eleanor Roosevelt in her syndicated column.

Carter, who was black, became part of the American Negro Theater under the direction of Abe Hill and played Ruth Lawson in its 1946 Broadway production of “Walk Hard.” She also appeared in Lou Peterson’s “Take a Giant Step” in 1953.

After moving to Milwaukee, she enrolled in the Wisconsin State Teachers College and later earned her master’s degree. She taught at the University of Wisconsin-Milwaukee and became the first female African-American professor at Bank Street College of Education in New York City in 1981.

In her 80s, she wrote three children’s books inspired by her childhood: “Bye, Mis’ Lela”, “Wilhe’mina Miles: After the Stork Night” and “Grandma’s General Store – the Ark.”

She is survived by her daughter, Carol Carter; a son, James Carter Jr.; and a grandson, James Yates Carter.