By Holbrook Mohr and Jeff Amy

Mississippi Power Co. spokesman Jeff Shepard said about 3,600 customers were without power Wednesday morning (Aug. 29). He said the majority of the outages were being reported in Biloxi.

Curfews were extended to noon in all three coastal counties — Hancock, Harrison and Jackson. Officials said road conditions were too bad for anyone to be out.

Highway 603, the main route to Bay St. Louis and Waveland, was closed at Interstate 10.

Darryl Antoine, a Waveland city worker, spent the night cutting trees off of roads and checking the city’s wells. He drove to his cousin’s house early Wednesday to check on it.

Most of that street was flooded, but the house was rebuilt on stilts after Katrina and didn’t appear to have wind damage. Antwoine said his own house was without power, but otherwise fine.

Jerry Beaugez, an assistant with the Bay St. Louis mayor’s office has been working with the fire department, and said things have gone relatively well but it’s too early to celebrate. 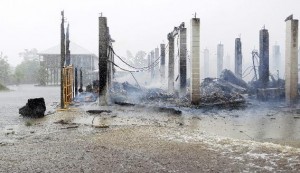 The water was still rising, a tin peeled off a business in Waveland and street signs fluttered in the wind. The storm could pound the area for hours and officials considered closing Highway 603, the main connector from Interstate 10 to Bay St. Louis and Waveland.

“There’s not a lot we can do until everything subsides,” he said.

Along low-lying areas along Mississippi’s Gulf Coast on Wednesday hurricane-driven water rose several feet in some spots while thousands waited out the storm in shelters. Utilities were reporting more than 15,000 people without power Wednesday and several hundred more scattered around south Mississippi.

Hancock County Emergency Management Director Brian Adam said the water stood up to 4 feet deep in many low-lying areas of Hancock County and was still rising while the vast storm system lumbered off the mouth of the Mississippi River.

“It’s flooding in quite a bit of places,” Adam said, citing reports from Pearlington, Lakeshore and parts of Waveland and Bay St. Louis.

Police waved drivers off U.S. 90, the main beach road in Gulfport, because of flooding. A billboard had torn loose and water stood foot-deep in some areas, knee-deep elsewhere.

Adam said crews successfully rescued three people who had called for help after a houseboat broke loose in Pearlington, near the Louisiana state line but had no major incidents to report immediately. 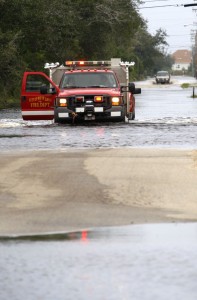 Hancock County is unusually vulnerable to storm surge because water driven into the “Mississippi Sound” piles up against the V-shape coast where Louisiana and Mississippi come together. Adam said he wasn’t sure if any structures had been damaged. Most buildings destroyed by 2005’s Hurricane Katrina in Hancock County were elevated when rebuilt.

“We’ve had a great turnout at shelters, people are taking the storm seriously,” Huffstatler said.

In Jackson County, Monica Cooper, a spokeswoman for the emergency management agency, was currently reporting 80 flooded roads and reports were increasing “steadily.”

She said low lying areas of Moss Point, Gautier and St. Martin were among the hardest hit with flooding. She said the flooding was a combination of heavy rainfall and storm surge.

At presstime, Cooper said she could not confirm reports that some homes had flooded.

“But with the extent of the flooding I would not be surprised,” she said.

In Pass Christian, a coastal community that had been wiped out by hurricanes Camille and Katrina, Mayor Chipper McDermott was optimistic Isaac would not deal a heavy blow.

“It’s not too bad, but the whole coast is going to be a mess,” he said early Wednesday.

McDermott stood on the porch of the $6 million municipal complex built after Katrina wiped out the city seven years ago today. Its walls are made of 1-foot-thick concrete to withstand hurricane winds.

By Ayesha K. Mustafaa
Staff Writer
Hinds County District 1 Supervisor Robert Graham, the board president, said he was “appalled” by the outcome of last week’s 3-2 vote that cut $2.5 million from the Hinds County Sheriff’s budget.
After that vote, Graham scheduled a special meeting for Monday, Sept. 10, in an effort to reverse the board’s decision… […]

JACKSON, Miss. (AP) — A defense expert testified Tuesday that a Georgia woman died from previous unlicensed cosmetic injections in her buttocks, not the ones at the center of a depraved-heart murder trial in Mississippi. […]

In a cash strapped district JPS continues to spend

Board of Trustees approves big-spending measures

Faced with questions about big spending in his former school district, Jackson Public Schools Superintendent Dr. Cedrick Gray vows to remain focused on JPS and moving this district forward. “I cannot afford to lose sight of what is before us, even with lingering questions,” Gray said. “Everything we did in Fayette County, Tenn., was above board and done with board approval.”

Last week Gray asked JPS board of trustees to approve hiring a financial team that would help with restructuring its debt and save the district money. Gray submitted to the board some background on the team and the reason he wanted to bring them on board. What he did not give them were hard cold numbers on cost or projected savings…. […]