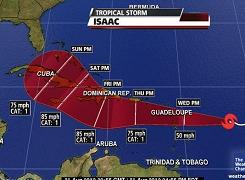 JACKSON – It’s expected to become a Category 1 hurricane Friday as it approaches the Dominican Republic and Haiti.

As coastal residents prepare, forecasters say Isaac will likely weaken a little while crossing over Haiti and the eastern two-thirds of Cuba.

It’s then expected to move toward Florida, but experts say there’s “significant uncertainty” about the threat it poses to that state.

Seventy-thousand delegates, journalists and protesters are expected to descend on Tampa for next week’s Republican National Convention.

Bryant said, “We’ll begin the process. We’ll be in contact with emergency managers on the three coast counties and slowly beginning the process of planning to see if implementation will be necessary.”

Out in the Eastern Atlantic, another tropical storm, Joyce, formed over the open water, but forecasters say it poses no immediate threat to land.

JACKSON, Mississippi (AP) –Mississippi Gov. Phil Bryant issued an emergency declaration Monday for 36 of the state’s 82 counties to speed up response to a storm that’s expected to bring snow and ice to central […]

Billy T. Bonner entered the plea in Wayne County Circuit Court. Sentencing is scheduled for the March of 2013 term of court.
[…]

PEARL, Mississippi (AP) — At least two people were killed in traffic wrecks Tuesday as the state deals with another round of winter weather. The Mississippi Emergency Management Agency said it has received reports of […]