When Gail M. Brown became editor of The Mississippi Link four and  a half years ago, she said the opportunity was a blessing that came when she and her family needed it most.

It is the opinion of The Mississippi Link that Brown joined the staff at a time when the paper was preparing for rapid growth in its daily online edition as well the print edition.Bringing her on as editor was a decision that helped move the paper to this new level instantaneously.

Brown came to the Link with a background in both public relations and research journalism. With mixed emotions, she informed the paper that another blessing had come her way.

Effective Aug. 24, Brown will trade her position as editor and the field of journalism for a position as project director in the non-profit arena. She said this new opportunity will allow her to utilize more of her public relations skills, her first love. 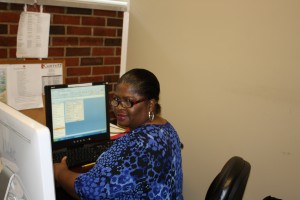 “I have truly valued my tenure here; it has been a great educational journey,” said Brown. “The Mississippi Link has afforded me the opportunity to experience things I never imagined.  When asked what were some of her most memorable assignments she noted:

Being among media members from around the nation covering the historic 2008 presidential debate between candidates Barack Obama and John McCain in Oxford, Miss.;

Traveling to the Ninth Ward in New Orleans and to Plaquemines Parish, La. to cover one of the anniversary observances of Hurricane Katrina, highlighting residents who returned home;

Videotaping first lady Michelle Obama’s visit to Brinkley Middle School in Jackson, one of two schools she visited to kick off her Let’s Move campaign;

Covering parents’ outrage and protest over Jackson Public School District’s attempt to eliminate the strings program from the curriculum. (The Mississippi Link was one of a few media organizations that stayed with the issue until the board’s decision was reversed);

Most recently touring the inside of the Hinds County Jail with fellow colleague Managing Editor Othor Cain and videotaping decades of structural decay; and

Partnering with the American Heart Association to cover and feature articles in a year-long Stroke Awareness Campaign and other health awareness issues.

Brown said she enjoyed directing the 2009 Mississippi Link Journalism Camp. “It was a blast for me as well as many other assignments and community projects.”

When asked what she will miss as she moves to her new career, Brown said, “I will miss the family-type atmosphere at the Link and the complimenting calls from our readers. “But I won’t miss the often long hours!”

However, she said she understands that often when you are seeking “top quality,” one has to put in the necessary time.

The Mississippi Link Founder Socrates Garrett said he wishes Brown the best in her new position. He said “I think Gail has demonstrated all the qualities of a professional. She has been compassionate, loyal, and resilient in carrying out the goals and objectives assigned to her. When someone demonstrates these characteristics, others take notes and job offers will come.”

“Gail is the kind of employee from whom you never want to hear, “I am submitting my letter of resignation,” said Minnie Garrett, editor emeritus. She gave 110 percent of herself in everything she did.

Managing Editor Othor Cain said, “Gail is a very compassionate person. She enjoys writing stories that make you feel good.” He said “Every business needs to have someone that is filled with compassion.”

From a personal standpoint Cain said, “Gail has shown me how to be more compassionate.”

Brown said her experiences at The Mississippi Link will always be etched in her mind, and she will carry them with her always.

CAMARILLO, California (AP) — The average U.S. price of a gallon of gasoline has dropped 14 cents over the past two weeks.

The Lundberg Survey of fuel prices released Sunday says the price of a gallon of regular is $3.38. Midgrade costs an average of $3.58 a gallon, and premium is $3.71.

Mississippi has the fourth-lowest gas prices in the country with an average of $3.11 per gallon for regular… […]

Orlando nightclub shooting: 50 dead, over 50 wounded in deadliest mass shooting in US ORLANDO, Fla. (AP) — A gunman wielding an assault-type rifle and a handgun opened fire inside a crowded gay nightclub early […]