Murrah opened the season this past Saturday, Aug. 18, at Newell Field. What was supposed to be a football game looked more like a track meet. Speed, speed and more speed raced up and down Newell Field. Hattiesburg with their spread offense and what looked like USA Men’s Olympic 4×100 relay team, ran away with the game. Hattiesburg scored on their first possession. Quarterback Jamal Hatten sprinted 52 yards to the endzone. Tony Bridges, Brandon Acker and Marquise Walker torched the Murrah Mustangs at different stages of the game.

Murrah, coming off a playoff season for the first time in 18 years, got off to a bad start. Malik Dear found out what it’s like to be a marked man. By far, the only person Hattiesburg was paying attention to was Dear. He was gang tackled most of the night. The turnovers Murrah committed did not help the cause either. Interceptions and fumbles doomed the Mustangs offense. Once Hattiesburg got the ball, it was more like the gunman starting a race than a quarterback saying hike. Hattiesburg lead Murrah at the half, 28 to 6.

Murrah tried to build some momentum to start the second half; they came out with a surprise onside kick and recovered. However, they fumbled on the first play of the drive. Rollercoaster emotions were the norm Saturday evening for the Mustang faithful. Murrah buckled down and played a better second half. Although it wasn’t enough to avoid the 51-22 loss, there were moments to build upon. Murrah rebounded last season after an opening week loss to Hattiesburg. Time will tell if they can do it again. 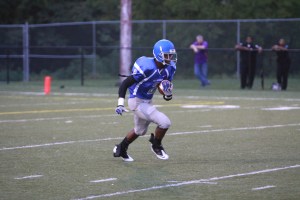 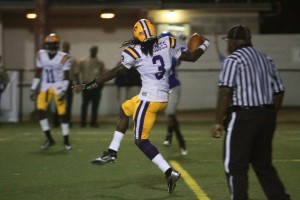 Tony Bridges back pedals into endzone. 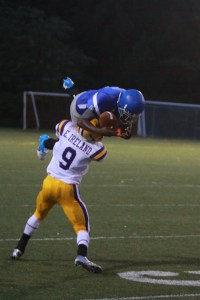