LOS ANGELES (AP) – Olympic champion Gabby Douglas basked in the “Tonight'' spotlight and the admiration of fellow guest Michelle Obama, but the teenager already is thinking ahead to 2016.

Host Jay Leno, who noted that Douglas' last name was an anagram for “USA gold,'' asked Monday if the gymnast intended to compete in the next Summer Games, in Rio de Janeiro.

The 16-year-old looked like a winner, dressed in a gold metallic skirt and a fitted, black motorcycle jacket. Her hair, worn in a utilitarian bun during the Olympics, was gathered in a chic ponytail.

Her best accessory were the two gold medals she carried onstage, handing one to Leno and the other to Mrs. Obama for closer inspection.

“I don't even deserve to hold this,'' Leno said later as he returned it.

Douglas became the third consecutive U.S. athlete and first African-American to win the all-around title. She and her teammates gave the U.S. its first Olympic title in women's gymnastics since 1996.

Leno asked Douglas about meeting Prince William's wife, who offered her congratulations to the team, including Aly Raisman.

“It was definitely an exciting experience. … Aly told her she liked her fashion, and she was like, ‘Well, I love your leos (leotards),''' Douglas said.

She admitted indulging in post-Olympics fast food to the wrong person: healthy eating advocate Mrs. Obama, who teased the champion.

“You're setting me back, Gabby,'' Obama told her.

“Sorry!'' replied the athlete, who confessed to chowing down on a McDonalds' breakfast sandwich to celebrate her victories.

But she impressed Mrs. Obama and Leno with a detailed description of how, starting at age 6, she learned to navigate the 4-inch-wide balance beam.

The host wanted to know if the dream of winning matched the reality. 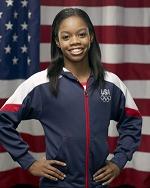 “I think it's very different, and when I mean ‘different,' it's in a better way,'' Douglas replied. “I mean, I never thought I would be doing the show with the first lady, or even you, Jay.''

Leno started to reply, when Mrs. Obama jumped in.

On another sports-related topic, Leno put the first lady on the spot about what he called “this whole kiss cam thing'' at a recent basketball game.

Last month, she and President Barack Obama were at a U.S. Olympic men's basketball team exhibition game in Washington when the arena's “Kiss Cam'' panned to them. She appeared to shake her head “no'' to a smooch.

“I had just walked in and sat down, and I just saw my face on the Jumbotron. And I'm still a little embarrassed. … I didn't see the `kiss cam' part,'' she said.

After the couple was booed, daughter Malia set them straight.

“She was just disgusted with us,'' Obama recounted. “She said, `Why didn't you kiss?'''

The 13-year-old quickly proved her skills as a problem-solver.

“I've arranged for you to get another chance on the kiss cam,'' she told her parents, according to the first lady. The president delivered, giving the first lady a big kiss on the lips and adding a peck on the forehead for good measure.

Then Leno turned serious, asking Obama what she's proudest of in her husband's first term.

“Truly, health reform,'' including protection for those with pre-existing conditions,'' she said.

By Shanderia K. Posey Editor She hasn’t seen it yet, but somebody somewhere has a photo of Charence Higgins, Miss Jackson State University 2015-2016, greeting First Lady Michelle Obama prior to commencement last Saturday at […]

Mississippi’s Delegation ‘seized the moment’ at the Democratic National Convention

By Othor Cain
Managing Editor
Mississippi may have had one of the smallest delegations to attend the Democratic National Convention (DNC), recently held in Charlotte, N.C., but no one can argue that perhaps the magnolia state had the most spirit and some of the best visibility and media exposure.
Media outlets across the globe including China, Australia, the BBC in England and the Al Jazeera network in the Middle East, chopped (chomped) at the bits to spotlight some of the ‘Mississippi Stars.’… […]

An emotional Obama unveils his plan to cut gun violence

WASHINGTON, D.C. (AP) — President Barack Obama, at one point wiping tears from his cheek, unveiled his plan Tuesday to tighten control and enforcement of firearms in the U.S., using his presidential powers in the […]