Smith urges caregivers to pray for strength; find time for self

Not only does Alzheimer’s disease robs its victims of their quality of life, but it also impacts the caregivers as well.
Marshia Smith, a longtime Jackson resident and an active member of Holy Temple Missionary Baptist Church, serves the Mothers’ Ministry where she often is expected to give words of encouragement and pearls of wisdom to others.
But upon learning that her dear aunt Earnestine, who lives 90-plus miles away in Hattiesburg, had dementia, Smith needed encouragement herself. Her aunt, Smith’s late mother’s sister, has no children of her own.
Smith, a Hattiesburg native who moved to Jackson in 1966, had worked in accounting at MINACT, Inc. since 1988. She was contemplating retirement, when about a year or so ago, upon learning of her aunt’s condition, she accelerated her retirement. “My life turned upside down when the doctor [initially] gave us the word about my aunt’s condition. I cried a lot,” said Smith. She said the decision to help her aunt was not a difficult one at all. “She had been there all my life for me,” said Smith.
Her aunt lives with her (the aunt’s) brother, who is also a senior citizen, but Smith realized her aunt would need another woman around the house to help her. 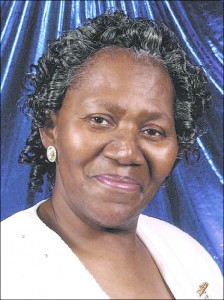 Smith, who is also considered a senior citizen, drives back and forth to Hattiesburg staying and caring for her aunt “10 to 12 days” at a time.
Smith said part of that care includes lifting her aunt, assisting her with personal needs, etc. “I pray for strength,” she said.
“It is difficult seeing how the disease has changed my aunt’s life,” Smith told The Mississippi Link. “Seeing her not knowing what to do; not remembering things from a few days before is hard. The only word I can think of to describe the whole thing is ‘hard.’ Prior to the dementia, my aunt was very independent. She was a kind and giving individual. She didn’t socialize a whole lot, but she was always willing to drop whatever she was doing  to help her relatives and others. So, giving back to her is the least I can do.”
She also said her aunt always kept her home looking well managed. Since the dementia, housekeeping does not seem to be a priority anymore.
Smith said she has not been told that her aunt’s condition is Alzheimer’s. The only diagnosis that she and her uncle have received is “dementia.”
People often ask what is the difference between the two terms.  According to a resource guide by the Alzheimer’s Association, “Alzheimer’s is one of several disorders that causes the gradual loss of brain cells . . . Dementia is an umbrella term for several symptoms related to a decline in thinking skills.” Another resource publication titled, “Unraveling the Mystery of Alzheimer’s,” states:  “Everyone who has Alzheimer’s has dementia, but everyone with dementia does not have Alzheimer’s”
Definitions aside, Smith said the most important issue is making sure the loved one receives the love and care he or she needs.
She told The Mississippi Link Wednesday (Aug. 15) that she was feeling good that with prayer and making sure her aunt maintains her doctor’s visits, her aunt appears to be doing “a little better.” “She is more aware of taking care of some of her personal needs. I feel better about some of the improvements she’s making,” she said.
Being a caregiver is often stressful. Smith cautions all caregivers to not allow the disease to rob them of their own health. She said she was losing track of caring for herself until a few church members made her aware of it. “I appreciated that. It made me pay attention. Coping can be tough, but as caregivers we need to keep ourselves going. Again, I say pray and ask the Lord for strength and allow some time for self.”
Smith is one of hundreds of area citizens supporting the upcoming 2012 Jackson Walk to End Alzheimer’s  Sept. 15, at 9 a.m. downtown Jackson at the Mississippi Museum of Art – Art Garden. Funds raised will benefit research, education and care.
For more information, call the Alzheimer’s Association – Mississippi Chapter at (601) 987-0020 or visit: http://act.alz.org/site/TR/Walk/MS-Mississippi?pg=entry&fr_id=1512

Editor’s Note:  As with other community efforts, The Mississippi Link is proud to be a media partner with the Mississippi Chapter of the Alzheimer’s Association in its upcoming 2012 Jackson Walk To End Alzheimer’s, Sept. 15, to help increase awareness of a disease that has become a growing national problem, negatively impacting the lives of its victims and caregivers. To help others to know that they are not alone, The Mississippi Link would like to feature your Alzheimer’s story in this mini-series. Please email us:  editor@mississippilink.com

JPS takes next step to ensure its budget is met

District files an appeal against city

The Jackson Public School District lived up to its assertion that it would take legal action against the city of Jackson in an effort to ensure its budget is properly met.

The district had 10 days after the city council voted and passed a measure that would give a tax increase of 2.5 mills, which essentially gave the school district $86 million. The district submitted a budget of $88 million that would have required a 5 mills assessment to tax payers. That measure was voted down by the majority of the city council.

The lone standing council member that supported assessing the taxpayers of Jackson the required millage that would have given the school district its recommended budget was Ward 3 councilwoman Larita Cooper-Stokes. […]

Man gets 83 years in shooting of Jackson officer

March 12, 2012 Monica Land News Comments Off on Man gets 83 years in shooting of Jackson officer

JACKSON – (AP) A federal appeals court panel has upheld the 83-year sentence given a man for his role in a 2008 shooting and carjacking that injured a Jackson police officer. Antonio Turner was sentenced […]