LONDON – After leaving the most important decision of her career up to her persuasive mother, Brittney Reese knew there was only one place to start looking when it was time to celebrate her Olympic gold medal in the long jump.

Reese claimed one of the three gold medals the U.S. track and field team won Wednesday night at the London Games, becoming the first American woman to win the Olympic long jump title since Jackie Joyner-Kersee in 1988.

“It's a surreal moment,” she said. “I got very emotional — you do when you're representing your country.

“My mom and aunt are here, so this is a great moment for me and my family.” 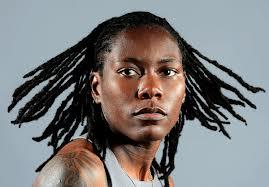 It was a major achievement for Reese, who could easily have been lost to track and field. She was considering offers for basketball scholarships when her mother, Carla Young, made a fateful decision for her:

Stick with track and field, at the University of Mississippi.

“My mom fell in love with Ole Miss and they were still in contact with me while I was in my community college,” Reese said. “I sat down with her and she told me track is what I needed to do — and Mamma knows best, so that's what I did.”

Now that she's the reigning Olympic and world champion indoors and out — and is third all-time in the U.S. behind Joyner-Kersee and Marion Jones in terms of longest jumps — she could be excused for thinking about another career change.

But that's not likely before the 2016 Games in Rio.

“I feel like this is just the beginning,” the 25-year-old Reese said. “I am going to train four more years and come back and hopefully defend my title.”

She dedicated the London Olympic title to the people of Mississippi and others who are still rebuilding in the wake of the deadly and devastating Hurricane Katrina in 2005.

She does what she can — during the 2011 Thanksgiving season, Reese purchased 100 turkeys to be given away to help the homeless near her hometown of Gulfport — but the gold medal is special.

Reese lived through the disaster that damaged her house, but was conscious that she got off lightly and wanted to do something significant at the Beijing Olympics four years ago to give her friends and neighbors a boost.

“In '08 my goal was to come out there and get a medal. And when I placed fifth, I was devastated and cried the whole way back to the (athletes) village,” she said. “I had the whole Gulf coast behind me. I got a lot of emails, a lot of Facebook and Twitter about my Gulf coast family representing me, being there for me, and I wanted to come out here and do that for them.”

Reese and her family had to sandbag their home to avoid flood inundation during the disaster, but the ceiling of the house collapsed and forced them out.

“We were out of the house for like two months because we had mold and we were living out of mobile homes and trailers,” she said. “It was a tough time and (makes) you realize how blessed you are to have necessities.

“It was a real true eye-opener and my city is now rebuilt and we have most of the stuff back. But we don't have a lot of the homes back. This was a great way for me to bring something home to them to show that we can all do this together.”

Where are they now? A look at some Mississippi figures from Hurricane Katrina

August 28, 2015 Online Editor News Comments Off on Where are they now? A look at some Mississippi figures from Hurricane Katrina

(AP) With Friday marking the 10th anniversary of Hurricane Katrina’s landfall, The Associated Press takes a look at some of the key Mississippi figures from the storm and its aftermath: — HALEY BARBOUR: The Mississippi […]

Peach Bowl: Ole Miss CB Senquez Golson knows ‘we are going to have to cover longer’

December 30, 2014 Online Editor Sports Comments Off on Peach Bowl: Ole Miss CB Senquez Golson knows ‘we are going to have to cover longer’