The decision means the overhaul will continue to go into effect over the next several years, affecting the way that countless Americans receive and pay for their personal medical care. The ruling also handed Obama a campaign-season victory in rejecting arguments that Congress went too far in requiring most Americans to have health insurance or pay a penalty.

Chief Justice John Roberts announced the court’s judgment that allows the law to go forward with its aim of covering more than 30 million uninsured Americans.

The court found problems with the law’s expansion of Medicaid, but even there said the expansion could proceed as long as the federal government does not threaten to withhold states’ entire Medicaid allotment if they don’t take part in the law’s extension.

It’s one of the court’s most important rulings in more than a decade, with the country watching to see of the health care reform Congress passed for Obama in 2010 survived to see its complete implementation in 2014. 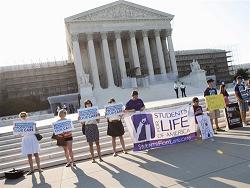 Crowds gathered outside the Supreme Court in Washington Thursday morning, holding signs advocating many sides of the debate.

This week, Illionois Gov. Pat Quinn expressed hope the law would survive but Wednesday highlighted a particular piece that insurers be required to allow children to stay on their parents’ health-care plans into adulthood.

The decision on the law — known as the Affordable Care Act — is expected to influence whether Obama wins a second term in November or is beaten by Mitt Romney, who along with Republicans in Congress called for the health-care law’s dismantling.

Opponents argued the law was overly broad, intrusive and ultimately unconstitutional. There were also questions about whether it will reduce costs and deliver better care without hurting businesses.

The Supreme Court had three possible paths with the law, which was enacted March 23, 2010. The justices could have upheld it in total, uphold it in parts or strike it down.

Observers saw one key part of the law — the mandate that individuals obtain health insurance by 2014 or pay a penalty — as a potential element vulnerable to being struck down as unconstitutional.

Also at issue was the section expanding Medicaid by making more of the medically needy eligible for the federal/state program. That section could mean Cook County gets up to $70 million a year from the federal government for treating previously uninsured adults whose care had been subsidized by the county and state.

The sweeping law also banned health insurers from denying coverage to those with many pre-existing conditions, did away with lifetime caps on insurance payouts for those fighting chronic conditions and gives the elderly discounts on prescription drugs and free preventive services like colonoscopies.

State Sen. Bill Brady (R-Bloomington), who co-chaired a legislative panel studying the health care law’s push to set up exchanges that would enable the uninsured to buy health care, said Wednesday he hoped the court tossed out the law entirely so the states can address health-care legislation on their own without the “heavy hand of the federal bureaucracy dictating this.”

“I think we’ve got a better opportunity if we have the ability to work as 50 different organizations — by that I mean states — to do what we think is the right thing for our people and our state,” Brady said. “Eventually, one model will probably find itself better and other states will adopt it.”

Brady, Quinn’s 2010 gubernatorial rival, said he wants to gauge Congress’ reaction and the reaction of the winner of the presidential campaign before embarking on a state health-care initiative of any sort.

Supreme Court watchers have pointed to Justice Anthony Kennedy as the potential swing vote on the health-care law case.

After three days of oral arguments in March on the case, much of the betting was on a 5-4 decision — close either way. .

Solicitor General Donald Verrilli — who defended the Obama administration — took more than 100 questions from the justices, while the lawyers challenging the law got about only 87, according to CNN’s count.

As CNN reported, “Verrilli, in the view of many court-watchers, had a bad day, struggling at times to find his voice and fend off a furious rhetorical assault by some skeptical members of the bench.

“Chief Justice John Roberts was especially tough — he interrupted Verrilli 23 times, but only on seven occasions on the other side.”

“You are,” Kennedy told Verrilli, “changing the relationship of the individual to the government.”

Census: No sign of economic rebound for many in U.S.

WASHINGTON (AP) — Even as the economy shows signs of improvement and poverty levels off, new U.S. census data suggests the gains are halting and uneven. Depending on education, race, income and even marriage, not all segments of the population are seeing an economic turnaround.

Poverty is on the rise in single-mother families. More people are falling into the lowest-income group. And after earlier signs of increased mobility, fewer people are moving as homeownership declined for a fifth straight year… […]

Obama: On Syria, US, world credibility is on line

WASHINGTON (AP) — In an impassioned appeal for support both at home and abroad, President Barack Obama said Wednesday the credibility of the international community and Congress is on the line in the debate over how to respond to the alleged use of chemical weapons in Syria. As Obama made his case overseas, legislators on Capitol Hill debated whether a proposed resolution authorizing military force would shift the momentum after more than two years of Syrian civil war…. […]

By KATHLEEN HENNESSEY and EMILY SWANSON   WASHINGTON (AP) — As many in the United States hold their noses in the search for the next president, they’re increasingly warming to the president they already have. Buoyed by some […]