JACKSON – With the recent donation of $10,000, a life-sized statue honoring the late civil rights icon Fannie Lou Hamer is moving closer to reality. An additional $25,000 is needed to complete the project by Oct. 5, a day before Hamer’s 95th birthday.

The presentation was made on June 14 at Jackson State University. The donation made by the Mississippi Freedom 50th Foundation. In 2011, that group sponsored a 50th anniversary reunion for Freedom Riders, the young black and white people who rode buses to the Deep South in 1961 to challenge segregation in the transportation system.

Fannie Lou Hamer was born to sharecroppers in 1917 and later worked as one and as a timekeeper on a plantation in Sunflower County, near the Mississippi River. She died in 1977.

Hamer helped found the racially diverse Mississippi Freedom Democratic Party, which challenged seating of the all-white Mississippi delegation at the 1964 Democratic National Convention. She was perhaps best known for describing her feelings about the oppressive segregation she had grown up with in Mississippi by saying: “I’m sick and tired of being sick and tired.”

Hamer was also instrumental in the modification of the Voting Rights Act of 1965.

Charles McLaurin, who worked with Hamer during the early 1960s and the Student Nonviolent Coordinating Committee (SNCC), accepted the donation on behalf of the Fannie Lou Hamer Statue Fund Committee (FLHSC).

“I always had a dream of seeing a statue of Fannie Lou Hamer still standing tall in the Mississippi Delta,” McLaurin said.

AT&T donated $10,000 to the statue fund earlier this year and poet Alice Walker also contributed $10,000. The remaining monies have been made by voluntary and private donations.

“These donations will stimulate the FLHSC’s fundraising efforts and speed up the day when the statue committee can unveil the state of a strong African American woman in the Mississippi Delta whose determination to vote, helped to bring Democracy to Mississippi and broaden the base of political participation in the nation,” McLaurin said.

New Jersey sculptor, Brian Hanlon, has been hired to create the Hamer statue which will be placed in the Fannie Lou Hamer Memorial Garden in Hamer’s hometown of Ruleville, Miss.

Maegan Parker Brooks, another member of the FLHSC, said the statue will be bronze and will stand precisely 5’4” as a tribute to one of Hamer’s most memorable quotations.

“Speaking before a Kentucky audience in the summer of 1968, Hamer discussed Dr. Martin Luther King Jr.’s recent assassination and declared: “I’m never sure when I leave home whether I’ll make it back or not . . . but if I fall, I’ll fall five feet and four inches forward for freedom and I’m not backing off it!,” Brooks said. 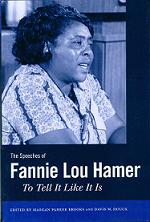 Brooks, who earned her PhD in Communication Arts, Rhetoric with an emphasis in Afro-American Studies from the University of Wisconsin-Madison, co-edited with Davis W. Houck, the recently released anthology, The Speeches of Fannie Lou Hamer: To Tell It Like It Is. She is working on her next book, A Voice That Could Stir an Army: Fannie Lou Hamer and the Rhetoric of the Black Freedom Movement.

Brooks also talked about her book and the Fannie Lou Hamer statue.

“It is the shared hope of the FLHSC that Mrs. Hamer’s statue will keep her memory alive, help educate people about her legacy and help put Ruleville on the map of civil rights tour destinations,” Brooks said. “A statue of Mrs. Hamer will make a further significant contribution to representing black women in the American statuary – where they are woefully underrepresented.”

J-S-WHEW wakes up at halftime to defeat Prairie View

On a rainy, soggy day that forced the Sonic Boom to perform halftime in the stands, Jackson State snapped out of a first half trance to blowout Prairie View 34 to 13. That’s the ending. The beginning, was more like the previous week, two quarters with no points.

A little over 6500 people braved the elements to watch JSU look lethargic and uninspired to begin the game.

Dedric McDonald started the game but wasn’t the same quarterback who led three fourth quarter touchdowns just seven days ago. He seemed to be pressing…. […]