JACKSON – Nearly 10,000 people attended the two district conventions held in Jackson this month at the Mississippi Coliseum and Fairgrounds. The annual convention of Jehovah’s Witnesses was entitled: ‘Safeguard Your Heart!’ and had delegates to attend from as far away as Louisiana, Arkansas and Alabama.

The three-day district conventions began on May 18 in Brooklyn, New York; Jersey City, New Jersey; Oklahoma City, Oklahoma; and Portland, Oregon and they will continue through mid-September.

There will be 385 conventions held in 103 cities throughout the United States. 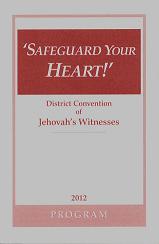 The program will be held in English, Spanish, and 18 other languages, including American Sign Language. The total projected attendance for the United States is over 1.7 million. Each of the more than 50 speakers and participants on the program offer their time voluntarily.

The last convention held in Jackson took place June 8-10 and featured the same bible-based talks and symposiums as the other conventions.

Men, women and children sat quietly and orderly in their seats paying attention to the entire program using the bible liberally, with many taking personal notes.

The first floor middle section was designated for the elderly and disabled and dozens of wheelchairs extended to the far rear of the auditorium.

The talk: ‘Why Must We Safeguard Our Heart?’ kicked off the program Friday morning and reminded those in attendance that the figurative heart needs to be guarded because it is the “seat of motivation,” the speaker Michael Phillips said.

“It is the whole inner person…our thoughts, intentions, desires and emotions,” he said.

Referencing the scripture at Jeremiah 17:9, which says the heart is “treacherous and desperate,” Phillips compared the heart to a criminal who is treacherous and desperate and who therefore needs to be guarded in prison. He encouraged congregants to likewise guard their heart and monitor what goes in and out of it by means of unwholesome recreation and/or entertainment.

The first multi-talk symposium was also held Friday morning and featured the talks: ‘Beware of Dangerous Heart Conditions! – a “Cunning Heart”; a “Double Heart”; “Halfhearted” and “In Want of Heart.”

Friday afternoon also saw the presentation of the Sound Drama: “Fortify Your Hearts to Be Witnesses,” which allowed those in attendance to listen to a dramatic recorded account of Jesus Christ’s execution and resurrection.

Saturday’s program featured three symposiums that included warnings against flirting, idolatry and spiritism, as well as the recommendation to ’Show Generosity”; “Widen Out in Love” and “Remaining Faithful to Your Marriage Mate.”

One of the highlights of Saturday’s program was the baptismal talk given by Jeffery Allen, a speaker from the Bethel headquarters of Jehovah’s Witnesses in Brooklyn, N.Y.

Saturday saw 19 delegates baptized ranging in age from 13 to 70.

That was followed by the Public Bible Discourse: “The Former Things Will Not…Come Up Into the Heart” based on Isaiah 65:13, 14, 17-19, 21 – 23. The speaker, Derrick Walker, reminded the audience that based on God’s Word the Bible, any unpleasant and painful memories will soon be wiped away just like a ‘clean slate.’

Another of Sunday’s highlights was the drama ‘What Is True Love’ based on Proverbs 22:3 and 1 John 4:8. The hour-long drama told the story of two young women faced with the decision of whom to date and eventually marry based on spiritual principles. One young woman later made the wrong decision and married for the wrong reasons, while her friend married someone who was considered unpopular in high school but was spiritually strong and deep-rooted in his faith.

The convention saw the release of two new brochures and two DVDs: “Become Jehovah’s Friend – Listen, Obey and be Blessed” and “Walk By Faith, Not By Sight.’

Jehovah’s Witnesses, who number more than 7.6 million members worldwide, are located in 236 lands and 109,403 congregations. Known for their door to door preaching activity, they voluntarily spent more than 1.7 billion hours in that work last year and conducted 8.5 million free home bible studies. For more information on convention city locations and times log onto www.watchtower.org.