I must take better care of this body

For the past several years, the Community Students Learning Center (CSLC) of Lexington has held an event called “Community Awareness Day” which focuses primarily on living healthier lifestyles, and I have covered it and even set up a booth to inform people about The Mississippi Link newspaper.

When I arrived, a number of slated activities had ended, including an early morning walk around the hospital’s track – an activity I definitely needed.

The Community Awareness Day event is always a big deal for the attendees. As I walked around speaking to people, I heard a lady say, “I’m not leaving until I get on that machine that tells you how old you really are.” Like a “but-insky” I said, ‘Oh, yes, you will be amazed, because I had reported on it and utilized a similar machine before.’

The machine is called the Polar TriFit 700 Fitness Assessment System. I was told that this machine, however, is a newer more advanced model than the one I had reported on before. However, it was still a part of the center’s S.T.O.R.Y  (Strategic Tactics for Obesity Reduction in Youth) program. So, since it had been a while since I had received an assessment, I decided to let the Polar TriFit tell my story. I hesitated but the CSLC staff assured me that my information was confidential. The technician even asked others waiting to step back while I was assessed.

Unfortunately, I got a rude awakening. My chronological age is 54, but body is 62-years-old. I had already begun to work on improving my health by entering the Jackson Medical Mall’s Biggest Losers Contest among the churches, but I had no idea, I had allowed my body to get in such terrible shape. I shutter to think what my report would have been before I started monitoring my eating habits. Plus, I was told that I did not get the full assessment. They were only doing brief assessment for the sake of time. My body might be older than 62.

Please don’t think that I have been in denial about my weight problem. I have battled obesity for a long time, but to be honest, I have been more of a procrastinator than a fighter. Nearly every complaint that I have relates to obesity. Yet, it took a machine to tell me that my body is a decade or more older than it is.

Since May 19, I have been doing the following on a regular basis: walking early in the morning before work, giving up the office donuts on Fridays, drinking more water, stop sitting for long hours at my computer without getting up to move around in the building, eating more baked or grilled foods as well as more fruits and vegetables, and just saying no to fried foods except for once a week.

I went home this past Memorial Day weekend where I grew up in rural Holmes County, and to my surprise since I’ve been walking, I was able to walk during the early mornings for 45 minutes to an hour without falling out.

When I thought about the scripture that teaches that our body is the temple of the Holy Spirit (1 Corinthians 6:19), I said to myself, ‘What have I done? Forgive me, Lord. I am thanking you in advance for another chance.’ If you have been procrastinating, don’t wait for a rude awakening. Let my story spur you on to a healthier body.

I will occasionally give you updates on how I’m doing with my determination to live and urging my family – husband and son to do the same.

Thanks, Community Students Learning Center for my wake-up call. 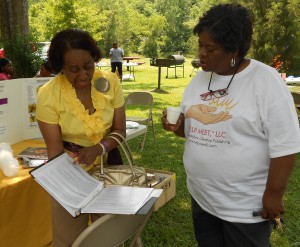 Gail Brown sampling Organo Gold beverages from one of the vendors

The Mississippi Link Newswire There will be a runoff election between Tyrone Hendrix and Dennis Sweet on July 1. Hendrix received 28.74% of the vote and Sweet received 28.26% of the vote. All 12 precincts […]

JACKSON, Miss. (AP) – A new multi-million dollar development in Jackson will bring businesses, housing and the first movie theater in the city since the 1990s. WAPT-TV (http://bit.ly/1JYawNU ) reports the site along Interstate 55 will […]

Gingrich: I won't quit if I lose Tuesday in South

March 12, 2012 Monica Land News Comments Off on Gingrich: I won't quit if I lose Tuesday in South

ELLISVILLE – (AP) Spurning calls for him to get out, Newt Gingrich insisted Friday that he'll stay in the race for the Republican presidential nomination even if he loses two Southern primaries this week. “I […]