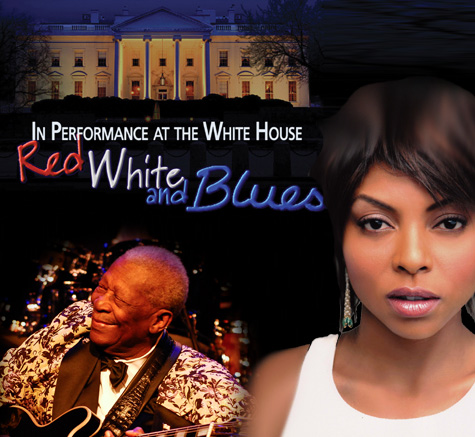 WASHINGTON, D.C. – In his opening remarks Tuesday night at the “In Performance at the White House” Blues Event, President Barack Obama spoke to his guests on how the blues traveled from the cotton fields of Mississippi to the South Side of Chicago.

“In 1941, the folklorist Alan Lomax travelled throughout the Deep South, recording local musicians on behalf of the Library of Congress. In Stovall, Mississippi, he met McKinley Morganfield, a guitar player who went by the nickname Muddy Waters. And Lomax sent Muddy two pressings from their sessions together, along with a check for $20.”

“Later in his life, Muddy recalled what happened next. He said, “I carried that record up to the corner and I put it on the jukebox. Just played it and played it, and said, I can do it. I can do it.” In many ways, that right there is the story of the blues.”

Tuesday’s program was the ninth in a series of evenings celebrating the music that tells the story of America.

Since 2009, the President and First Lady have hosted musical tributes that have showcased Jazz, Country, Classical, Hispanic and the music of the Civil Rights Movement. Tuesday’s performers included B.B. King, Mick Jagger and Buddy Guy.

Tuesday night, Mr. Obama gave those in attendance, a brief history lesson as to how the world came to have and appreciate the blues.

“This is music with humble beginnings — roots in slavery and segregation, a society that rarely treated black Americans with the dignity and respect that they deserved,” the president said to his audience. “The blues bore witness to these hard times. And like so many of the men and women who sang them, the blues refused to be limited by the circumstances of their birth.”

“The music migrated north — from Mississippi Delta to Memphis to my hometown in Chicago. It helped lay the foundation for rock and roll, and R&B and hip-hop. It inspired artists and audiences around the world. And as tonight’s performers will demonstrate, the blues continue to draw a crowd…And as we celebrate Black History Month, the blues reminds us that we’ve been through tougher times before — that’s why I’m proud to have these artists here…their music teaches us that when we find ourselves at a crossroads, we don’t shy away from our problems. We own them. We face up to them. We deal with them. We sing about them. We turn them into art. And even as we confront the challenges of today, we imagine a brighter tomorrow, saying, I can do it, just like Muddy Waters did all those years ago.”

With that, the president introduced the first performer, “The King of the Blues,” and Mississippi-native B.B. King.

King, 86, arrived in a wheelchair, but rose tall to kick off the night with a raucous “Let the Good Times Roll,” quickly joined by other members of the ensemble. And he followed with “The Thrill is Gone.”

From there, Obama and his wife, Michelle, were swaying in their seats and singing along to an all-hits playlist including “St. James Infirmary” and “Let Me Love You.”

Jeff Beck slowed things down with an instrumental “Brush With the Blues,” as anticipation built for the arrival of Mick Jagger, who did not disappoint.

Later in the evening, the president just couldn’t say no: Jagger held out a microphone almost by way of command, and soon Obama was belting out the blues with the best of them.

The East Room of the White House was transformed into an intimate blues club for a concert featuring blues all-stars of the past, present and future – and the president himself.

The surprise performance by Obama came at the end of the playlist when the blues ensemble was singing “Sweet Home Chicago,” the blues anthem of Obama’s home town.

Buddy Guy prodded the president, saying he’d heard that the president sang part of an Al Green tune recently, and adding, “You gotta keep it up.”

Then Jagger handed over the mic, and Obama seemed compelled to comply.

“Come on, baby don’t you want to go,” the president sang out twice, handing off the mic to B.B. King momentarily, and then taking it back to tack on “Sweet Home Chicago” at the end.

That was how Obama ended the night.

This was how he began it: Obama said sometimes there are downsides to being the president. You can’t just go for a walk, for example.

And then there are the times that more than make up for all those frustrations, he said, like Tuesday night, when Jagger, King, Beck and other musical giants came by the house to sing the blues.

“I guess things even out a little bit,” Obama joked at the start of a rollicking East Room concert that was electrified by Jagger and the rest.

“This music speaks to something universal,” Obama declared. “No one goes through life without both joy and pain, triumph and sorrow. The blues gets all of that, sometimes with just one lyric or one note.”

The longtime Rolling Stones frontman delivered on “I Can’t Turn You Loose” and then teamed up with Beck on ”Commit a Crime.” Jagger got the president and his wife up out of their seats, swaying and clapping to the music, and picked up the pace with “Miss You,” performed with Shemekia Copeland and Susan Tedeschi.

Obama was clearly savoring the moment, closing his eyes at times and nodding his head as he lip-synced the words.

The president rose at the end to introduce the ensemble as the “White House Blues All-Stars” for the final song of the night, “Sweet Home Chicago.”

“For Michelle and me,” the president said, “there’s no blues like the song our artists have chosen to close with – the blues from our hometown.”

With that, the ensemble wrapped up the evening with “Sweet Home Chicago.” And then Jagger handed off the mic to Obama for his presidential coda.

In advance of the concert, Grammy-winner Keb Mo had joked during a rehearsal break that Obama himself would perform, and there could even be a record in the works. He joked that Obama’s record would be called, “After the second term, now I can finally get my groove on.”

Maybe he wasn’t joking after all.

The blues concert will be part of the “In Performance at the White House” series that airs on the Public Broadcasting Service. This one, designed to recognize Black History Month, will be broadcast on Monday, Feb. 27, on PBS stations and aired later on American Forces Network.