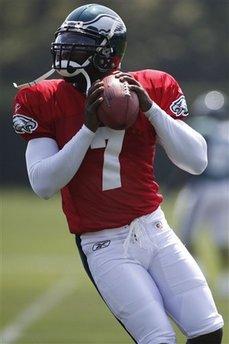 PHILADELPHIA – Michael Vick was under center and Brian Westbrook in the backfield. Brent Celek took his spot at tight end.

In Vick’s ideal scenario, he’d be taking snaps with the Philadelphia Eagles first-team offense in a regular season game, not just a routine preseason practice.

Yet that’s all it was. Vick ran the scout team offense on Tuesday, calling plays for Westbrook and other starters who are injured or recovering from injury, and not ready to play in Thursday’s preseason game against Indianapolis.

In October and beyond, Vick could be taking snaps with the starters in a game that counts.

The Eagles are not in a two-minute drill to find out.

It’s been all about normalcy in Vick’s first week of practice with the Eagles. No special looks, no Wildcat packages, just a fourth-string quarterback watching and learning. And he’s not traveling with the team to Indianapolis because he cannot play in the game — Andy Reid’s usual policy.

Vick, who has not commented since Friday’s press conference introducing him as an Eagle, can only play in the last two preseason games, starting with a home matchup against the Jacksonville Jaguars on Aug. 27.

NFL Commissioner Roger Goodell said he would consider Vick for full reinstatement by no later than Week 6 (Oct. 18-19).

Vick is not getting any special treatment in practice. He takes his reps at quarterback behind Donovan McNabb, A.J. Feeley and undrafted rookie Adam DiMichele. McNabb’s backup, Kevin Kolb, is out with a knee injury.

“He looks good to me,” Celek said of Vick. “He throws the ball real well and can read the defense.”

Reid has insisted that Kolb will be the No. 2, but only two quarterbacks are normally active. Once Vick is eligible for a regular season game, Reid could activate Vick at the expense of a player at another position, likely a special teams player. Reid also could make Kolb the No. 3 QB.

“I’m not sure what I’m going to do there. Something will happen,” Reid said.

More crucial to Philadelphia’s success this season than Vick is a healthy Westbrook. Westbrook, a two-time 1,000-yard rusher, has felt good in his first few practices since offseason ankle surgery.

The star running back had surgery to remove scar tissue and bone fragments from his right ankle in June. He initially hurt the ankle last season in Week 3 against Pittsburgh.

Westbrook also had his left knee cleaned out shortly after the Eagles lost to Arizona in the NFC championship game last January. He experienced pain in the ankle while rehabbing the knee.

Reid has increased Westbrook’s workload in each of his last three practices. The versatile Westbrook may just sit out the entire preseason and take his first snap in the Sept. 13 opener against Carolina.

“I think I’m right on time, right where I want to be at,” Westbrook said. “I wouldn’t mind getting in a game a little bit, but I don’t think not having any preseason games would hurt me as far as the regular season.”

Shawn Andrews had his back examined in Los Angeles on Monday and no structural damage was found. Reid was unsure when Andrews would practice.

Reid said starters will play the first half against the Colts.

The fans will be watching — so will Vick and several teammates.