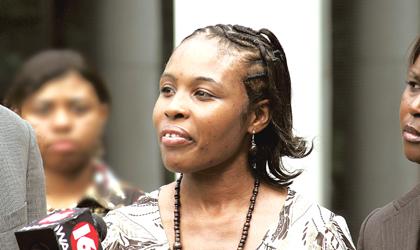 “It really did take something away from me,” Hattie Douglas, told a reporter during a recent press conference announcing her exoneration.

The 32-year-old Camden, Miss. resident spent a year in jail after being charged with the murder of her 11-month-old son Kad-darius. She was accused of giving her child alcohol that resulted in his death in August, 2006.

A press statement from her attorney’s office, The Law Office of Latrice Westbrooks, PLLC, included this comment: “Ms. Douglas was arrested after adamantly maintaining her innocence. Ms. Douglas raised five children without any reports of abuse from DHS or any other child protective agency. The Madison County Sheriff Depart-ment and the prior Madison County District Attorney’s Office tried to conveniently pressure Ms. Douglas into blaming the child’s father, Kevin Hamlin. Ms. Douglas stood her ground and refused to lie and blame him for something neither he or she committed.”

After becoming convinced of Douglas’ innocence, Westbrooks took the case pro bono. She then asked Dr. Leroy Riddick, a pathologist from Alabama; Lee Blum a toxicologist from NMS Labs of Pennsylvania, and Jackson attorney Chokwe Lumumba to become a part of Douglas’ legal team.

Westbrooks told the media that the original toxicology results were questionable. “Because of that, the case could not past the test of beyond a reasonable doubt,” Westbrooks said.

As it turned out, the child was prescribed medicine which contained alcohol. Kaddarius suffered from chronic respiratory problems. It was Riddick, “who determined that the child died from Interstitial Pneumonia and Myocarditis.”

Last week, Madison County officials dropped murder charges against Douglas because of a lack of evidence. Right now, Douglas is focusing on being reuniting with her children.

Prior to press time, Westbrooks told The Mississippi Link that she was working on the petition seeking the return of Douglas’ children. “I hope to have it filed by the end of the day,” she said.

How long the process of returing the children to their mother is uncertain. “But I hope it won’t take too long,” Westbrooks stated.

It has been nearly two years since the mother has seen her children. “Being with my kids; that’s all that’s important,” said Douglas.