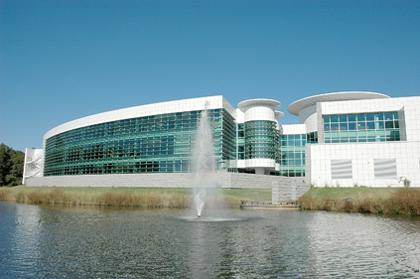 On the first day of the special legislative session, called by Gov. Haley Barbour, the House voted to reauthorize the Mississippi Employment Sec-urity Service (MDES) for a year.

A bill was passed to the Senate to reauthorize the agency permanently.

Lawmakers had adjourned the regular session last month without reauthorizing MDES, and portions of the unemployment compensation law were set to expire July 1.

Had the agency ceased to exist at the start of the new fiscal year, employers would be forced to pay nearly eight times the usual tax, from .8% to 6.2%, and would lose federal workforce training dollars. This would cause funds for unemployed Mississippians to cease totally.

Based on 2007 taxable wages, this loss would result in over $400 million to Mississippi employers. This would also force all offices operated or financed by MDES to close.

In Hinds County alone, 4,756 people would lose unemployment benefits as well as 773 veterans.

One of the major concerns that lawmakers had with MDES was the amount of money spent to advertise for the agency. But Deputy Executive Director and Chief Operating Officer Les Range said the $1 million plus spent for advertising in 2006 was needed.

“In 2006, we had to spend that amount in advertising mainly because of the Katrina catastrophe,” said Range. “People had to know how to get their money.”

The agency stands behind the spending of the funds, which allowed it to reach Katrina victims to inform them about hurricane recovery services provided by the agency.

However, no state funds were used to purchase media. Advertisements heard on local stations are offered free to air public service announcements about the services available at local WIN Job Centers or about special workforce development programs.

According to federal statutes, Mississippi’s failure to have an approved law governing Employment Security would result in the Secretary of Labor not being able to certify Mississippi. This would cause the state not to be in conformity under Section 3304.

But with the House’s vote, the agency would be authorized for at least another year.

But nearing the end of the first day of the session, that hope was unsuccessful when the vote in the Senate to suspend the rules and reauthorize MDES failed.

At press time, according to Range, the next step would be to wait until the second session day to see if the Senate would pass the bill.

The future of the agency remains unknown.