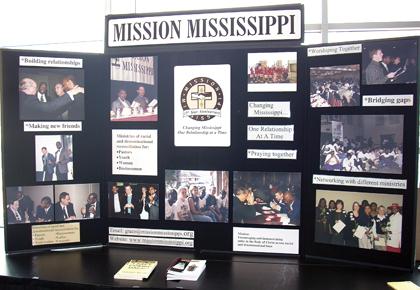 Following the National Day of Prayer, Mission Mississippi (MM), a growing faith-based organization, released what they termed, “some good news.”

During its 15th-Year Anniversary celebration and 2008 Mississippi Mayors’ Prayer Breakfast, MM told more than 700 statewide attendees that 70 percent of subjects in their recent study felt “race relations are better than they have been in the past.”

The event was held in the downtown Jackson Tel-com Center.

“When we started down this journey, we were just taking one step at a time,” said keynote speaker Dan Hall, vice president of InvestLinc Securities, LLC, an investment firm specializing in private, alternative investments. Hall is also a founding board member of Mission Mississippi.

Hall pointed out that while there are improvements in race relations in Mississippi, “there is significant work to be done” as also indicated by the study. He stressed that the issue of race is not confined to Mississippi. “Throughout history and all over the world people have struggled with race and religion,” he said.

“Racial Reconciliation, at its core, is not a black and white issue…it is a human issue. Somebody say, ‘human,’” he interjected. The audience echoed, “human!”

The study, conducted for MM by the Godwin Group – an advertising firm, included more than 400 people. Highlights of the research results are listed below:

1. More than 70% feel that race relations in Mississippi are better than they have been in the past.

2. Over 90% of Mississippi’s Christians feel that relationships between racial groups need some level of improvement.

3. About 35% of those surveyed feel that relationships between racial groups in Mississippi need significant improvement.

4. Over 60% strongly agree that spirituality can bring racial reconciliation to Mississippi.

5. Statewide, one out of five individuals has heard of Mission Mississippi.

“This research serves as a guide for us as we continue our mission to change Mississippi – especially by sharing our message with younger generations,” said Mission Mississippi President Dr. Dolphus Weary.

When asked what the organization has done to recruit a younger generation of members so they can carry on the work his generation started, Weary responded: “Quite frankly, not very much. That’s why this year at our 15th year anniversary, we want to start refocusing so that we can get all our colleges and high schools involved. This has basically been an adult movement. We do a prayer breakfast at all the colleges, but we have not done a major deal to get the young people in the room. Therefore, one of the things we’re talking about now is how to do a better job of getting young people involved.”

Hall also expressed concerns about a disparity among the generations and bridging that gap in order to pass on the baton.

Weary, Hall and MM Executive Director Rev. Neddie Winters view themselves as somewhat of an A-Team of the group that travels throughout the state carrying the message of reconciliation.

During the media briefing just before releasing the study results, Winters jokingly stated: “One of the most exiting things I’ve learned over the past 15 years is that I can call Dan, Dan rather than, Mr. Hall.” At his comment, laughter filled the room.

Winters and other MM executives acknowledged and thanked the sponsors, the mayors, program participants, volunteers, and others.