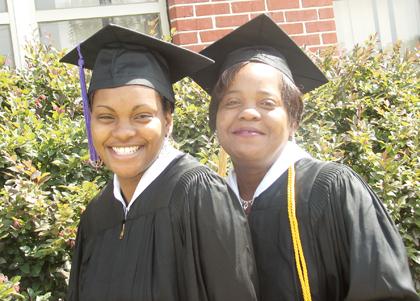 “First of all, I came from a low income family and college wasn’t an option,” said Erica Steele. “In high school I had a baby. After high school I had three more kids. I was told [while taking a typing class] that the cycle would continue.” The single mother, however, was determined to be successful. Struggling with her four children, she worked for Temp Staff, landed a job at her alma mater Jackson State, and took classes in the University’s education incentive program.

Being a single parent, she noted that she gave her children to the Lord and brought them up in church. “The Lord opened a lot of doors, but He also closed a lot of doors. I was up to get a job at Tougaloo College but didn’t get it. God opened the door for me instead to go to school at JSU,” she reflected.

Erica admitted that one of the hardest things was listening to negative comments. For instance, “I was told by a lady that all my children were bastards and they would never go to heaven, but I made it, leaning on Jesus who put the right people in our path,” she stated.

Armetha Steele recalled that her mother sacrificed for her and her siblings. She never wanted them to go to bed hungry. A former welfare recipient and worker of two jobs, Erica Steele saw a bright future for her children.

“I really appreciate my mother; my dad was never there for birthdays and graduation. My mother was there for every parent-teacher conference,” Armetha said admirably.

When her children were in school, she – without a car – watched over them. “I would go outside the school and walk behind my children like I was looking for something,” she said. “I used to be so afraid of people sexually messing with them; I used to walk them to day care.

“She was concerned about our wellbeing,” her daughter said with a loving smile. Of reminiscing moments, Armetha referred to Erica as the bridge that got her over. As she put it, “She taught me how to survive. She was a motivator. She always taught me to have faith, to pray about it.”

Further referencing her mother as a bridge, Armetha quickly commented: “If the teacher called from the school, she would leave work and come to us. If the neighbor reported us, she would get on us. She would also whip us if we fought with each other.”

The bond Erica Steele has with her children seems to be irreplaceable.

Nicholas Gordon said it best in his poem, “I Thought I Knew a Thing or Two of Beauty”: “The love you felt for me I now can feel, which makes it not more lovely but more real.”